Since our retirement from law a year ago we've spent a lot more time at our home in Gig Harbor on Colvos Passage looking out at Vashon Island and Mount Rainier. Things I've not paid attention to are now enjoyable to see and experience.

This morning while Lita and I were having coffee on the upper balcony four deer came along the beach at the outer edge. The tide was out and they walked in single file with their hoofs in the water. A small fawn, a young doe and two other does. They trotted along the water edge with the fawn working to keep up. They come for the coolness along the water, they drink from our stream that runs down our property and out to the ocean and they drink or eat for the salt they need. They are always very nervous exposed in the open they way they are so they hurry along the beach and then cut back across to the wood and up the hill.

We have two young bucks and a number of does and fawns on the ten acres or so we own which is all wooded. They have become rather tame and aren't afraid of cars or people so we need to be careful driving out our long driveway. Five of them were eating leafs from the ground at the top if the driveway yesterday. The neighbor had pruned trees and they were eating what was on the ground. We have to be alert for them when we use the driveway. 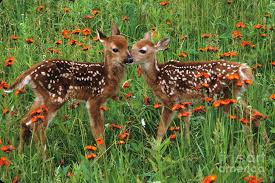 We have two or three eagles who call this property and the nearby area home. Yesterday a large bald headed eagle flew by with a branch that had to be five feet long. Where it was going or what it was doing I don't know, but it was impressive.They are majestic. The crows are always after the eagles, flying around them and making noise when they fly. I don't know if that is territorial or just crows. It looks like the eagle could take them all out without difficulty however. When they fish they circle higher and higher in every widening circles searching with their "eagle eye" for fish in the clear water below. When they find one they want they close their wings and dive like a rock into the water often going below the service. If successful they fly off with a fish in their talons. Sometimes the fish is too heavy and they struggle. On occasion they lose their grip and the fish falls back into the sea.

Over the past several weeks we have seen the babies born to the Canadian geese who gather at the beach in front of our house. They like the stream of water that flows across the beach from our property and they find things to eat in the water. Their long neck goes under water and their white rear pops up on top. Then their head bobs to the surface like a child's toy in a glass of water. It's amusing to watch. The babies are golden brown and stick very close to their parents. they paddle along as a group with them. There are also the older, teen age, babies as well hanging out with their parents. The flocks  are more than a hundred at a time in different groups. Fortunately, they stick to the water and beach. They don't come up on our lawn probably because of the dogs.

The seagulls have developed their own tool for opening clams. They find them on the beach in front of the house and pick them up with their beak. They fly very high in the air and drop them, aiming for something solid to break the shell when it hits the ground. Then they swoop down to eat the claim out of then broken shell. The problem is other seagulls and the crows are alert for one with a clam and they very cleverly fly at a much lower level then the seagull with the claim. As soon as the clam is released they head for where it lands. They get there before the one that dropped it can fly down and claim the prize. There is a struggle for the broken clam that is very noisy.

Every year around Mother's Day hundreds of little Terns arrive all at once as a flock. We know they are here because it sounds like a heavy metal band playing on the beach. They fly up in a group and fly back to where they were. It's like a scene from safari in Africa where the large birds rise and land by the hundreds. They hang around a couple of weeks and then they are gone until next year.We look forward to seeing them.

Then gardens right now are in full bloom and it is beautiful to see. Our garden is producing for our meals and we have strawberries as well. It is very nice being here at this time.