On Sunday, February 21, I "endured" my birthday. At age 81 you don't "enjoy" birthdays except perhaps from a feeling of gratitude at being alive. As I have said to others, it's a little like waking up that morning and discovering you have been trapped in the body of an 81-year-old. You don't fully get used to the idea that you are aging in your mind until physical ailments remind you.

The next day, on Monday, we flew to Kona on the big Island of Hawaii. Our flight was delayed for one hour because of a mechanical 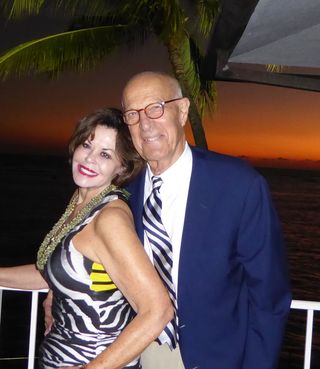 problems and it took six hours to get here, but the beautiful sun was an enormous treat over the rain that we left behind. We are staying once again at the Mauna Lani Bay Hotel. Certainly, we have stayed at more eloquent  hotels on this island which offer more amenities than here, but we enjoy the bungalows the hotel offers. Our favorite one has been the Orchid bungalow which is a short walking distance from the hotel and features its own swimming pool. It is a large unit facing the water with a fish pond in front. There is a very large living room and dining area with a guest bedroom in addition to the master bedroom.  We were disappointed to discover that a storm had required removal of the landscaping which gave it privacy from the dining area next door. However, it is still a special treat to stay here.

The hotel has two  dining areas, one of which is located at the beach. A five-minute shuttle ride takes you to a  shopping mall where there is a large Tommy Bahama store, a grocery store, multiple shops and dining opportunities. The Fairmont Hotel is a 10 minute shuttle from this hotel. We ate dinner there last night at a restaurant located on the grounds of the hotel near the water. There was an Amway gathering of salespeople  staying at the hotel. Apparently, the trip is paid for as a bonus for their top salespeople. The hotel is full.

We ate at our hotel the first night and on the second took a taxi about 5 miles upland to a small village where there is an Italian restaurant recommended by the hotel. The chef apparently is from one of the hotels and opened his own place. It was not fancy, but it was full. Lita's pasta was good and mine was okay. It was crowded, so the service was slow. I'm glad we  tried it but I'm not thrilled paying an $80 round trip for a taxi for that short a distance. It is however Hawaii and everything is more expensive.

For the last few days there have been warnings of huge waves. Beaches have been closed to people because of the danger. Projected waves of 25 to as much as 40 feet high predicted. The waves in front of our  bungalow break into white foam and are a spectacular view. The ocean in front of our unit seems to have been protected from the big waves and surfers at been enjoying the water daily.

We have been treated to a migration of whales moving past the beach here. Most blow out a plume of spray to alert us of their presence. Others simply roll with a large black body visible. A few treat us to their tail standing up into the air before disappearing under the water. Even though they are some distance off shore it is special to watch with or without binoculars.

Our hotel is rather full as well. Breakfast offers a banquet of different foods all of which is quite good. I have enjoyed fruits and the fish while avoiding the calorie foods. The other day, LIta bought  fresh octopus at the grocery store which we had for lunch and it was delicious. The fish and  fruit here are excellent because they are so fresh.

After our visit here for several days we will move on to Honolulu where we will stay at the Halekulani, a five star hotel on the beach. It's interesting that we came to the hotel where we are right now right after it first opened and was brand-new. We also stayed at the Halekulani right after it was newly opened following renovation. We enjoyed that hotel so much that we came back often and spent more than several Christmases at the hotel. In fact we actually stored our Christmas decorations at the hotel so we didn't have to pack it every Christmas. We were truly "regulars" at the hotel until we purchased our property in Scottsdale and began spending our time there. Hawaii is a very special place and we enjoy it a lot. However, Scottsdale is only two hours away and Hawaii is 5 to 6 hours away. So, we spend our quality time in Scottsdale and visit Hawaii for the unique experience.

We are in Hawaii who celebrate our wedding anniversary on February 27th.  We were married in 1981. The ceremony was in the living room of our house at 2727 La Venture Road in Mount Vernon Washington.  It was an affair to remember for a lot of reasons including the fact that a friend of mine, Judge John Wilson, now deceased, was going to perform the wedding, but,  got lost trying to find our house and didn't show when scheduled. Friends who were wedding guests got in a car to frantically search for him.  In the meantime, I made an emergency call to my former mentor at the Skagit County prosecuting attorneys office, who had been elected a judge, Jack Deierlein, who has passed on as well.  Jack being a great trooper immediately got into a car with his wife and drove to our house ready to perform the ceremony.  As the ceremony was beginning our friends rushed in with Judge Wilson now giving us two judges. To say that there was anguish among family present and chaos in general would be an understatement. Yes it was memorable simply because of the great love between us. Our honeymoon occurred directly after the ceremony when we flew to Florida where I was giving a talk to a group of lawyers. Bill Hicks and Bill Colson, two great Florida lawyers  entertained us and it turned out to be a great experience in spite of the confusion.

A decade later we flew our friend, Jesuit priest Fr. Frank Costello and a small wedding party to Positano, Italy where we renewed our marriage at the chapel at the St Pietro Hotel. It was a great experience without the drama of our first.

So, we will celebrate 35 years of togetherness, but if you listen to my wife she claims we have to double it because we also worked together all those years. However you calculate it, I've been blessed. She has always been the wind beneath my wings and without whom I would have never had success or happiness as I have been privileged to enjoy.