You probably remember the Three Stooges, not from their 1920s vaudeville comedy act, but from their movies which are still being shown. Well, last night Larry, Moe and Curley gave us 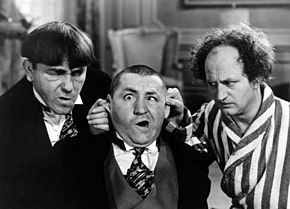 another comedy act only it was Ted Cruz, Marco Rubio and Donald Trump who enacted their slap stick craziness  on the debate stage. Yes, these are the same men who want to be president of the United States of America. It was a virtual circus with everything but the three main candidates doing everything but pulling on one another's nose ears or slapping each other like the Stodges movies. It can only be described as some kind of out of control chaos; the kind of scene you see on European TV where members of Parliament in some foreign country are involved in fistfights on the floor of parliament. We were treated  from the beginning  to the end of this side show of candidates interrupting, shouting, talking over the top of each other and ignoring the moderators. It completely out of control of the moderators who had lost any semblance of decorum almost from the start of the debate. It's hard to believe these were presidential candidates who spent the night making personal and vitriolic attacks on each other but directing most of  it at Donald Trump who responded in kind. These were moderators who deliberately provoked the outrageous conduct by their long, personal attacks in the form of a  question. They did not involve issues but were focused upon personal attacks. The lone exception to all this ridiculous conduct by candidates? Gov. John Kasich  Who refused to get involved in the schoolyard fight and who stuck to issues showing leadership.

The image these candidates present is striking. On one end of the stage you have Marco Rubio who looks like Tom Hanks in the 1988 movie

Big when at the end of the movie he returns to his true age but is wearing a suit much too big for him. Marco Rubio looks like a boy wearing his father's oversize suit. In the middle is Donald Trump whose hair looks like Troll Doll. Next to him is Ted Cruz who bears a striking resemblance to Professor Severus Snape in the Harry Potter movies and Gov. Kasich  looks like the orphan Harry Potter  caught in the middle of insanity.

Not only were the moderators unable to control any of the candidates, but Megyn Kelly and Chris Wallace contributed to the out of control chaos that existed throughout the evening by the inflammatory nature of their questioning and statements. Moderator Bret Baier was the only moderator who generally asked questions involving issues in an non-provoking manner.

Chris Wallace made long introductory statements ending in some kind of accusatory question. Megyn Kelly appeared to seize the opportunity for payback against Trump. She didn't ask him questions she made long inflammatory comments preceding a question that was an accusation of a personal failure on his part. They were obviously intended to provoke an angry response, which he avoided giving. For example, she hammered Trump on the issue of litigation involving his Trump University and then showed her true colors when she used this deliberately provacative approach:

“Mr. Trump, one of the things that voters love about you is that they believe you tell it like it is, but time and time again in this campaign, you have told voters one thing then reversed yourself in weeks or even sometimes days.” Then, without allowing him to respond she showed three sets of clips of Trump giving statements on troops staying in Afghanistan, George W. Bush lying about Iraq, and whether the US should accept Syrian refugees. Every sleazy lawyer knows how to ask the unanswerable question like: "Have you stopped beating your wife yet?" and this is a classic example, suggesting "time and time again" he  has been guilty without supporting proof. On top of that the three clips were less than compelling examples of what she was accusing him about. As a cross examiner she gets a failing grade and as an objective moderator she failed totally.

However, the three primary Republican candidates are in total agreement about key issues: Gun control? They are opposed to any restrictions on the sale of any kind of gun including assault rifles. Climate change? There is no climate change and therefore there is no need to do anything. affordable care act? An evil diabolical piece of legislation which must be immediately ended the save the people of America. Laws which regulate big business, the environment, and the economy along with every existing regulation?  Eliminate them all and good times will come back for everyone. Immigration? Well that's a mixed bag. Donald Trump wants to build a high wall along the border. The other candidates want to vote of Hispanics so they talk out of both sides of their mouth. Abortion, same-sex marriage and all things relating to personal sexual issues? Totally opposed and enact laws consistent with the religious beliefs of fundamental Christians. The military?  Create the greatest military in the world so we can scare everyone else into leaving us alone. Taxes? Eliminate the IRS. We will make up for it by reducing costs.

Republican or Democrat, I challenge you to objectively watch the replay of this three ring circus Fox called a "debate" and not shudder at the thought of any one of the three being president of the United States. Leadership, personal calmness under fire and strength of  character was no where to be seen except for Gov. Kasich who is far to rational and reasonable to ever be elected. Imagine one of these three inept ticking time bombs as president of the United States dealing with threats from Vladimir Putin of  Russia or Kim Jong-un of North Korea or even  Xi Jinping of China and a mushroom cloud should come to your mind.