On Thursday night we had group dinner at Seattle Center with all the beautiful glass on display created by Seattle’s own: Dale Chihuly. It was a lovely dinner with great service and great food. Fifty some people were seated at a long table 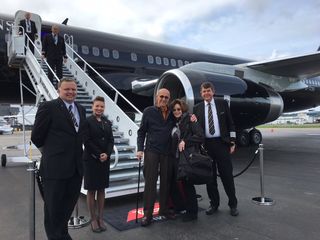 with beautiful settings and flower arrangements. A very nice evening and a chance to meet the other people going on the tour.

Friday morning we were driven to Boeing field where the airplane was parked. There were TSA people there to check us before boarding. The plane is large and the interior configured for space and comfort. It is a 3.5 hr flight to Anchorage for refueling before crossing the ocean to Japan which takes another 7.5 hours.
This flight is a very long flight, but the seats are large and go flat for a full bed. The service is excellent and the baggage all handled by the staff. The chef who goes on the plane with us does a great job out of a small galley onboard.

We arrived in Tokyo about 2:30 pm Saturday, the following day, after crossing the
international date line and losing a day. The plane lands at Narita which is a 1.5 hrs ride to Tokyo. People met us at the airport and got our luggage. They took us to immigration. We were unfortunate to end up in a line with a young woman processing the paper work. She was three times slower than the other lines. After immigration we cleared customs with our luggage and were taken by our guide to the van for the ride into Tokyo. A young Japanese tour guide on board talked most of way telling us about Japan – more than I cared to know.

We arrived at the small Four Seasons near the train station and were met with a staff to check us in. To my great distress my carry on bag was not on the van. Everyone else, including Lita got their carry on bags except me. Since it had all my money, credit cards, cameras and valuables I was not happy. After making all the Japanese know what an ugly American really looks like, another van arrived and my bag was on it. Without telling me someone had switched to another van. The staff was happy and also glad to see me leave with my bag.

The hotel room is very adequate and larger than I expected in Japan. We partially onloaded the two suitcase we each brought. We were really exhausted, but went to the buffet they had for us. It was a large display of sushi and seafood. Really an impressive offering and it was excellent. The hotel manager had a traditional Japanese clothing on and the staff were wearing kimonos. Three geisha performed a dance and played a Japanese instrument while we ate. It was a very delightful evening, but we were exhausted when we got to bed.

This morning, Sunday, we left the hotel at 9:00 am for a tour of local neighborhoods. We were driven in a van with a guide through the city. The imperial Palace and other things of interest were pointed out. It was a good tour of the city. Then we visited a very large electronics store several stories high with nothing but electronics of every description: lap tops, phones and anything electronic. Amazing displays crowed together, aisle after aisle. From there we drove to another area where there were a lot of high level stores. By then the rain began so I looked for places to get out of the rain while Lita went the other way shopping. Afterwards, we took the van to the place where we had a wonderful lunch. Everything is fresh and the seafood excellent.

Part of the group then attended a Tokyo Giants baseball game, but we came back to the hotel for a rest. Tonight we go to a Japanese resturant where you sit around the grill while they cook the food.

The nice thing about this tour is that everything, including gratuities are included.

Monday are more tours including a one hour train ride to nearby Kamskura for visits to gardens and a Zen temple. We were signed up, but decided since we have rain on Monday and given the distance we will stay in the city instead. I know we will miss something, but we are still dealing with jet lag and walking around in the rain doesn’t seem like much fun.

On Tuesday morning we drive back to our plane at Narita and on to Tianjin, China for our visit to Beijing. If I survive There will be another report.

One thought on “JAPAN – OUR FIRST STOP”