I’m sitting at table under an outdoor roof by a swimming pool at our room in the Maldives. It is 88 degrees within humidity 74% and overcast. We arrived here from Beijing last night after a 19 hour travel day. In reverse order we left the Beijing airport at 5:00 am, flew 7.5 hours to Sara Lanka, refueled and continued another 1.5 hours to the airport where we got on a totally humid commuter plane to the capital of the Maldives. We had a 2 hour ride to the airport at Beijing before leaving, followed by a grueling security check. On top of that, when we arrived in Male there was a torrential 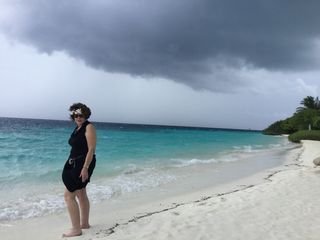 downpour which was like pouring water from a bucket.

Then we got on a bus to a harbor where we then boarded a yacht to the island where the Four Seasons was located. There were rollers and the sea rough. On landing in the pouring rain the yacht was moving and you had to get from boat to dock with assistance. By that point we had been on the move 19 hours. That’s how we got to where I am sitting right now. It was a rough way to travel due to a plane being out of service. We traveled in small groups so some people didn’t arrive until midnight island time.

We had dinner in the room and went to bed. About 1.5 hours later they arrived with more luggage. Today we are tired!

A brief summary of our trip to this point starts with Tokyo. That turns out to be an interesting place. The hotel was lovely, the service extraordinary and the people very friendly. We explored neighborhoods, visited a three story electronics store filled with every kind of electronics and went to upscale stores. We were at a market crowded with local people, ate sushi that came by the table on a revolving train where you picked up the dish you wanted and got local experiences. Our driver spoke no English but had an app on his phone that allowed him to speak Japanese which produced a voice in English and we could respond. In spite of it being a huge city we liked Tokyo.

We had a two hour drive to Narita and the airport where we were leaving from. It was not a long flight to Beijing. In China we landed at an airport where we had a long walk to the immigration area. We stood in the usual lines and finally got to the van for the ride to the hotel After a one and a half hour ride in the van to downtown Beijing, we arrived at a multi story building that looked somewhat industrial. This was the Four Seasons Hotel and when we entered the lobby it turned out to be beautiful. There were flowers all along the wall in the lobby and the inside was elegant. We were greeted by people dressed in traditional Chinese clothes and there was a reception waiting for us. Our room was on the 21st floor looking out over the city which had a haze that hung over the entire town. It was not as bad as Dubai but it was smog as we read about in the media regarding the air of Beijing.

We ate at the Chinese restaurant in the hotel. It was a beautiful restaurant which was richly decorated and had marble floors. The service was excellent but the food was disappointing. We got to bed and were thankful to have a chance to rest.

The next day we decided not to go with the group on the tours that were offered and instead got a car and driver with a guide. The car was a beautiful Mercedes sedan driven by a man who spoke no English and a young Chinese woman who spoke fluent English. The only problem was that she thought it was her duty to talk to us about history and information regarding the city that I had no interest in. But she was a pleasant, very bright person. We first visited Tinnamin Square which is a huge Square where there were many hundreds of tourists and people.

Driving is an ordeal. Traffic coming into town and city traffic are as bad as you can imagine. There are many large luxury cars: BMW, Mercedes, Range Rovers and even Cadillac SUV’s. The cars have a dance as do the drivers in Rome. Cutting in and switching places clearing other cars by inches. Few horns honk, but the dance is amazing.

From there we drove to the Forbidden City. It is a huge compound, the former home of the Emporor, hence forbidden to to outsiders. We entered walking around. Hundreds and hundreds of people milling around. It’s a huge courtyard with an enormous structures. The floor is large stones and very uneven, so walking y
Is difficult. We did a large turn and exited out a side gate. From there we were going to the Resturant to meet the group. It is a 20 minute ride away but we took 1.5 hours due to the traffic congestion.

The Chinese Resturant had large round tables and in the middle was a very large round wooden plate that rotated. Dishes of food were put on this plate and people would turn the plate to select a dish. The food is served family style and course after course was served. A great variety of wonderful food. A terrific meal.

That night we ate a the Italian Resturant in the hotel. Very beautiful with a chandelier mounted to the ceiling which was very long and curved like a snake. Unusual and beautiful.

The next day after enjoying the extensive buffet we got the same car and tour guide for a long drive to the Great Wall The group was going that night, but we were concerned about the 45 steps involved to where they were having dinner on the wall. We drove to an area where there was a flat area and steps sharply going up hill to the top of the wall. Dozens and dozens of stairs with a long line of people slowing weaving their way up. However, there wall also extended down to where we were and we could have a great view plus a view of other structures.

From there we drove back to the hotel and had lunch. Afterwards we packed for the 4:00 am bag pickup in the morning. We got a little sleep and were up at 3:30 am. The rest of the travel to the Maldives I’ve already described

Since starting this post, the sun has come up, a slight breeze picked up and we had Sushi plus Won Ton soup delivered for lunch. After a nap we will get ready for dinner.

Our next stop is Tanzania and safari. Stay tuned & say a traveler’s prayer.