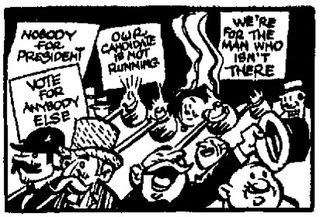 Dorothy Wilhelm (Dorothy@itsnevertoolate.com) wrote about this in the Sunday Tacoma News Tribune. She said that the story of the hoax was reported around the world. Newspapers carried the story that Republicans had voted for this “cousin of the Democrat donkey symbol.” The famous Bob Repley’s Believe it or Not radio show, book and newspaper column featured the story in his Museums of Hoaxes. It certainly put Milton, Washington on the map.

Not only that,in 1976 there was a cross-country tour with a rally in San Francisco in support of “Nobody for president.” Banners with slogans like “Nobody loves the poor” and “Nobody will end the war” were displayed. The cross-country tour was in the “Nobody bus.” On election day when it turned out that some 43% of eligible voters had failed to even bother to vote, supporters argued their candidate, Nobody, had clearly won the election.

What’s my point? Well, there are those who believe Donald Trump qualifies as a Republican jackass who can be elected to office just as it happened in Milton 1n 1938. But, there are others who claim if Hillary is elected then “Nobody” will have won the election. Either way, for those voters history will have been repeated.

You could say it is another choice between “the lessor of two evils” and my vote is for Sanders, but his chances are slim to none. For me, in this race, a choice of Hillary over Donald is both a vote against Dr Strangelove at the nuclear bomb button and in favor of a known, experienced leader. But, that’s what freedom of choice in elections is all about & everyone is entitled to their point of view.