This morning I watched on a live video stream over the Internet the funeral Mass from St Aloysius church in Spokane. The church was full of people and a crowd of priests plus the Bishop all there to honor a man of God.

The funeral was for a dear friend of Lita and I – Frank Costello, a Jesuit priest who died May 23, 2016 at the Sacred Heart Jesuit Center infirmary in Los Gatos California at age 94.

It should be said that while Frank was our friend, he was also a friend to a huge collection of other people of all faiths and cultures. His annual Christmas card list included personal notes to some 750 of his “friends,” many of whom he had helped in one way or another. Even after retiring he maintained a huge 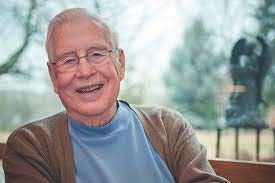 correspondence with people by phone and mail.

Our connection with Fr. Costello was through Gonzaga University when Lita was active on executive boards and we both were active in supporting Gonzaga Law School. Our friendship was such that when we renewed our wedding vow in Italy, we flew Frank with us to officiate. We put him up in Positano and the ceremony was in a small chapel at San Pietro hotel on the hill. The week we spent with him was a joy and a privilege.

Frank was the fourth of seven children born on June 12, 1921 in Spokane. He graduated from Gonzaga high school in Spokane in 1939 and entered the Jesuit novitiate at in August 1939 following an older brother’s previous path to the Jesuits. He was ordained a priest June 21, 1952 in Spokane.
He completed his PhD in political science at Georgetown University, had two master degrees and taught for 11 years at Seattle University. He became academic and Executive Vice President at Gonzaga University in 1970. Over the years he was involved in several peace advocacy organizations and remained active in the life of the University up to the time of his move to California.

This extraordinary and deeply holy man was a professor of political science and law as well as a priest and friend to countless people of many faiths and religions. His love for God and neighbor was legendary.However, a stroke in 2012 put him in the Jesuit infirmary and as his health continued to decline was transferred to the Jesuit infirmary in Los Gatos California in April 2015.

His brother William Costello S.J. and his sister Mother Mary Michael Costello were both in religious orders and preceded him in death. In fact, he was the last of his siblings to die in the family.

Frank Costello, was not only a very compassionate man with a love of neighbor but he was also a very humble man. When I think of father Costello I think of the poem “prayer of an aging Jesuit” which has these lines:

“Dearest Lord, teach me to grow gracefully. Help me to see that my community does me no wrong when gradually it takes from me my duties; when it no longer seems to seek my views.

Rid me of my pride and all the “wisdom” I have learned. Rid me of the illusion that I am indispensable.
And please Lord, let me be useful, contributing to the world my optimism, adding my prayers to the joyful fervor and courage of those who now take their turn at the helm.

Let my leaving the field of action be simple and natural – like a glowing, cheerful sunset. And now, finally, give me a clear, a deep understanding of the joyful destiny you have prepared for me, guiding my every step from the first day of my life. Lord, teach me to grow old….”

Frank did all of that and did in with extraordinary humility as well. Here’s to God’s servant and a man of true love of neighbor, Frank Costello. May he rest in peace.