When faced with challenges that make us feel insecure let’s remember that the most powerful force we have is what we tell ourselves and believe. It’s all in our attitude because we create our own reality. Even the Bible gives us examples of courage against what appear to be insurmountable challenges.

In 1-Samuel we have the famous story of David and Goliath. The Philistines had gathered their forces for war in Judah with a pitched camp. Saul and the Israelites had assembled on one Hill with the Philistines on another and a Valley in between. The Philistines had a champion named Goliath. He was nine feet tall and wore a bronze helmet with a coat of armor made of bronze that weighed 78 pounds. He carried a bronze javelin on his back along with a spear. Goliath shouted to the army of Israel a challenge to to fight him. The Bible says that: “on hearing the Philistines words, Saul and all the Israelites were dismayed and terrified.” Young David happened to be there on an errand from his father bringing something to his brothers who were in the Army. David wanted Goliath faced in battle but his brothers told him to keep quiet. 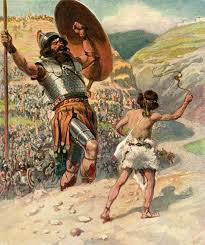 Saul heard about David’s talk and sent for him. When they met David told him that he would go out and fight Goliath. When Saul protested that he had no experience and was totally out-manned David told Saul:

“your servant has been keeping his father’s sheep. When a lion or a bear came and carried off the sheep from the flock,I rescued the sheep from its mouth. When it turned on me, I seized it by its hair, struck it and killed it. Your servant has killed both lion and Bear; this uncircumcised Philistine will be like one of them, because he has defied the armies of the living God. The Lord who rescued me from the palm of the lion and the power of the bear will rescue me from the hand of this Philistine”

Saul told him to go ahead and dressed him with a coat of armor and a bronze helmet on David’s head with a sword at his side. But David protested that he could use them and took them off. Instead he chose five smooth stones from the stream, put them in his shepherd’s pouch at his side and with his sling in hand approach the Philistine. When the Philistines saw he was little more than a boy he protested about being challenged by someone so unqualified. David told him that on this day “the Lord will deliver you into my hands and I’ll strike you down and cut off your head.” At that the Philistine advanced and David ran quickly towards him, reaching into his bag and taking out a stone. He slung it and struck the Philistine on the forehead. The Philistine fell face down on the ground. David took the Philistine’s sword and cut off his head. When the Philistine army saw what it happened they turned and ran with the Israel Army chasing them and killing them.

Victor Mather, writing in the New York Times has given some examples of recent similar upsets. Here are his examples:

•Rhonda Rousey was the undefeated champion in women’s mixed martial arts who had won her previous three bouts in under a minute. Her opponent had only two fighting championship bouts when they met in 2015. Holly Home knocked Rousey out in the second round. Afterwards, the New York Times reported: “those who watched it were stunned. Those who read about it the next morning did a double take.” It was almost as big an upset as the 1926 boxing match when Jack Dempsey unexpectedly lost to Gene Tunney.

•In September 2012 Serena Williams was matched at the United States Open semi final against Roberta Vinci. Williams was the winner of the previous four Grand Slam events. Vinci had never made a Grand Slam final. Nevertheless Vinci won decisively. The paper reported it as a “gargantuan upset.”

•In the 2008 Super Bowl in Arizona the New England Patriots faced the Giants. The Patriots were the National Football League’s only unbeaten regular-season team. The Giants had a record of 10 wins and six losses. The Giants won 17 to 14 and the paper reported it as “one of the greatest upsets in Super Bowl history.”

•Aleksandr Karelin faced Rulon Gardnar in the September 2000 Olympic Greco super heavyweight gold medal match held in Australia. Karelin was a three-time Olympic champion and had been undefeated for 13 years. Gardner was an American wrestling in his second major international tournament. Gardner won. The paper reported it as “one of the most startling upsets in Olympic wrestling history.”

•In 1980 at the Olympic Medal hockey game in New York the Soviet Union faced the United States. The Soviet team had won four straight Olympic gold medals. The United States was made up of a mixed group of college students. Yet, the United States won. It was described as “one of the most startling and dramatic upsets in Olympic history.”

•In June 1955 the United States Open playoff involved Ben Hogan who was a nine time major winner and John Fleck who had one only two minor tournaments in his career. Fleck won the playoff 69 to 72. It was an amazing upset. The newspapers and reporting it recalled the 1913 United States open where golf champions, Harry Varden and Ted Ray lost to an amateur Francis Ouimet.

•Man-of-War was a famous racehorse in the 1900s. It had easily won 16 of its career races. At Saratoga Springs in New York August 13, 1919 it was involved in a race where it was beaten by a horse named “upset.” The loss by half the length was the only loss of Man-of-War’s career.

Well, there you have it. Examples from real life where the unexpected happened and David overcame Goliath. As it says in Joshua 1:9: “Be strong & courageous. Do not be terrified; do not be discouraged”