That's the title of a best selling book written by Jess Lair a Montana university professor and published in 1977. In it he talks about self worth and how we should see how wonderful we were created to be even with all our faults I was reminded of the book one day  while listening to the radio in my car to a sermon by evangelist Joel Osteen which he titled "Seeing Yourself as a Masterpiece." In his talk he  said too many people go around feeling on the inside that they really don't like who they are. He says people think things like "if I was just a little taller, if I had a better personality, or if I just looked like 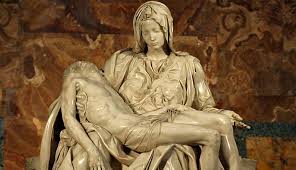 somebody else, then I would feel good about myself." But, he says when God created us he went to great lengths to make us exactly like He wanted. We didn't accidentally get our personality, height, looks, skin color. Instead God designed us on purpose to be the way we are. He says that therefore we  must fulfill our own destiny of being a masterpiece,  quoting Ephesians 2:10: "for we are God's masterpiece. He has created us anew in Christ Jesus, so we can do the good things he planned for us long ago."

The motivational speaker Tony Robbins has said: "I challenge you to make your life a masterpiece. I challenge you to join the ranks of those people who live what they teach, who walk their talk"  Keep in mind, as someone has said, you are allowed to be both a masterpiece and a work in progress simultaneously. Furthermore, when things don't happen right away, just remember that it takes six months to build a Rolls-Royce and 13 hours to build a Toyota. Nor is age an excuse for not being the masterpiece you were intended to be. Satchel Paige has said "How old would you be if you didn't know  how old you were?"

Reverend Robert Schuller once said "what great  things would you attempt if you knew you couldn't fail?" So, we should stop saying "if only" and  instead say "Wait until next time."  When you think about becoming the full masterpiece you were created to become remember failure does not mean you will never accomplish the goal. Let's think about the fact  Michael Jordan did not make his high school basketball team because the coach said he “wasn’t good enough.” Emily Dickinson wrote about 1,800 poems but only seven were published in her lifetime. Julia Child could barely cook until she was 34 years old and attended her first cooking class. Woopi Goldberg was a high school dropout. Babe Ruth hit 714 home runs, but he struck out 1,330 times.

Nor does your idea about your looks dictate your ability to achieve your full masterpiece status. Carol Burnett has said “I’ve learned that it’s not how you look that counts. It’s how you feel inside. I used to be a people pleaser and I wound up doing the darndest things because I thought I was only as good as wheat people thought of me. But I’ve learned that there’s n one on earth – including me – who everybody loves.”

Too often it is our thoughts about our past that keep us from our full potential. As someone has observed It isn’t the burdens of today that drives one mad. It is the regrets of yesterday and the fear of tomorrow. Regret and fear are twin thieves that rob us of today. Suzy Kassem has said "Never look back. The past is done. The future is a blank canvas. Work on creating a masterpiece. Only you have the power to make your painting beautiful."

Worry about the future is just as much a waste of time as guilt and regret over the past. Someone has told the story about travel during Lincoln’s day when they would have to cross streams and rivers. At a stop for the night he met a fellow traveler and they asked him about the Fox river which they had to cross ahead. They had been warned how dangerous it could be to cross.  “Oh yes” he said, “I know all about that river and have crossed it many times. It can be dangerous, but I have one fixed rule about it. I never cross that river until I reach it.” Dr. Daniel Amen MD is a national authority on healthy brain activity. He has described what he calls "automatic negative thoughts" or "ANT's" and one of them is what he calls "fortune-telling." He says this is where you predict the worst possible outcome to a situation you have to face or a fear about future events. You worry about what has not yet happened and you begin to picture the most negative outcome which has the same validity as your ability at fortune-telling. Worry is a thief that robs us of today's enjoyment. To become a full masterpiece you were created to be learn to replace worry with thoughts of positive outcomes.

You are a person of destiny and when you were created seeds of greatness for becoming the best you are capable of becoming were made part of who you are. It is your calling and you have all of the skills and tools required to achieve it. You are not ordinary. You may have room for improvement and you may be a work in progress,  but you have a destiny to become what God created you to be. As Joel OSteen has said we need to get up every morning and remind ourselves that we are excellent as we were created, put our shoulders back, hold our head up high and remember that we were created a masterpiece.