We arrived back in Seattle late last Tuesday and are still dealing with waking up at 2 am from jet lag and confused body clocks. Unpacking was almost as big a job as packing because we took entirely too much with us resulting in clothes we never wore and a very large pile of laundry and dry cleaning. Simba the cat was waiting for us when we walked in and immediately demanded food. The dog was with our friend Julie or Valentino would have been barking and dancing  in a circle. It is good to be back home. 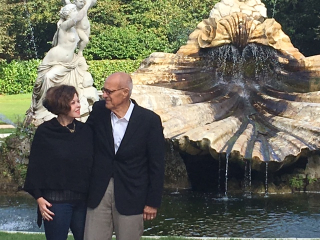 We were on the Seabourn ship Sojourn built in 2010 and is 650 long, 84 feet wide with 225 state rooms and a cruising speed of 19 knots. We had an  owners suite in the bow with a large wrap around balcony and plenty of room. We were benefited by calm seas and sunny weather during the entire 10 days we were aboard. We had boarded her in Barcelona after spending the night there and got off at a port near Rome. We visited a number of places in Spain, France and Italy. Many of the stops involved getting in an out of the smaller boats that transport you to shore and on occasion that was a challenge for me when the waves made it difficult. We did a lot of walking at the airport getting there, walking on the ship and walking on shore plus Heathrow in London which involves considerable walking, but we did it.

As always there was good food and excellent service. We don't drink, but there was plenty of free liquor as well. The routine involved a breakfast buffet of every kind of food in the morning and a trip to shore to explore. In some cases we ate lunch on shore, but often ate on the ship because the food and the selection was so good. At 4 pm we would have tea and enjoy the music. At 6:30 there would be a lecture which we sometimes attended, followed by dinner with a selection of three different places to eat plus a fourth one which you paid for. The entertainment would be at 10 pm at night which meant that we never saw it even once because we were in bed.

We have been on cruises more time then I remember and most often with Seabourn. We've enjoyed them because they are convenient and easy, but this time I felt 10 days was about 5 days longer than I wanted any more. That was  particularly noticeable when we checked into the hotel near Amalfi and settled in to Italian culture. I'd rather be in a town and explore around by car then be on a cruise in most cases. Amalfi drive was as it always is, a hair raising experience with bumper to bumper cars passing with inches to spare and buses requiring cars to move to allow them by. This chaos is interrupted by cars foolishly  rented by tourists who haven't a clue how to maneuver with skill of the Italian drivers. The view is spectacular from the Hotel Santa Canterina where we stayed. On a shore trip during cruise we had eaten at the  hotel San Peitro which is our favorite hotel on Amalfi  coast. We had renewed our wedding there with our dear  friend Fr. Costello and a few guests from the USA years ago and stayed  there often. We explored the area and went to Rovello as well as other places during the three days we were there.

From there we we driven to Bracciano a tiny town Located out in the country, but near the airport. We ate at the only small cafe open, but totally full of Italians having lunch. The noise level was amazing  with small children running around, wooden tables close to one  another and locals eating and talking. Waiters literally ran with food there were enough people crowded into this small place. We had a good lunch for a price so low I was surprised after the city prices. After lunch we  were driven to the hotel Villa Clementina. This small hotel was in a rural area. It was in a neighborhood  with residences out in the country. The owner Fausto and his son were there, but it was Sunday so there was no dinner and no one to carry luggage. Fausto looked 80 but was full of energy and was a charmer. His son, on the other hand, was not, but between the two they carried our luggage upstairs to a small modest room with a hard bed and a tiny TV. Fausto insisted the son fix sandwiches and a salad for us. It was late afternoon. A neighbor on the other side of a fence was chopping wood. There were Italians on the other side talking in their back yards and an orange cat who belonged to Fausto wanted in to our room. When he was refused he tried to come in through the screened window while purring and wanting to be petted. When that didn't work he found a chair in the lawn outside our window with a bit of sun. He curled up and went to sleep. We ate and went to sleep. The pillows were hard sponge and bed like a board.

We were up at 6  am to go to the airport. We were picked up by a driver and in a short time we were at the Rome airport. Security was easy but the airline counter wasn't open so we waited. When it did open our flight was 1.5 hours delayed so we would miss our London to Seattle flight. Lita worked hard and made a reservation at the Cliveden House a luxury hotel near London where we have stayed several times and once on a New Year's. This was the home  of Nancy Astor and  center of political intellectuals  in the 1920's & 1930's. Look  up  the notorius Profumo affair which occurred  here and led to the collapse of the conservative government of 1964. Nancy was famous for her great wit and her exchanges  with Winston Churchill. On one occasion she said to him: "If you  were my husband, I'd  poison your tea!" To which Churchill replied: "Madame, if  you were my wife, I'd drink it." This wonderful estate is a five star luxury hotel. We had a wonderful afternoon, night and half of the next day there before going to the airport.

There was a Korean wedding  at the  hotel that afternoon.  We learned that the wealthy family involved have  arranged seven separate marriage ceremonies at seven different locations because seven is a lucky number. They flew all the guests  in from Singapore for this wedding and the day after the wedding flew everyone back to Singapore. I don’t know which number this was, but there will a total of seven in different places around the world. That night there was an elaborate fireworks display. It had to have been very expensive since there was also a large reception dinner.

Security was  easy at the airport and after a wait we boarded the plane for the long flight home. On arrival in Seattle we got through customs very easily because we have taken the time before  leaving to qualify for Global Travel special processing. Our car was waiting and we were very happy to arrive back in Gig Harbor.