That's the title of a book written by my father Paul Luvera Sr and edited by my sister Phyllis Luvera Ennes. It has just been privately printed for our large 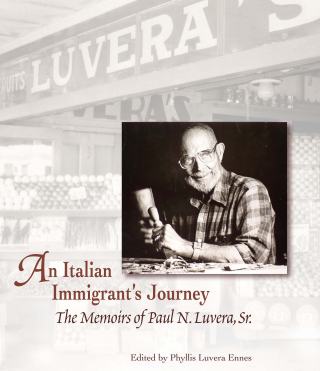 family and it is an interesting story of an immigrant family's success in America. I just published in this blog, on the anniversary of dad's death, November 4th, a  short outline of his life. It's the story of a young boy who traveled with his mother and sister from Italy to Canada to be with my grandfather and dad's brother who had come there first. It was after they had been able to earn the money to send for the rest of the family they were able to come to Canada. Grandfather had been working with other immigrants installing  tracks for the Canadian Pacific Railroad  when they moved onto Coleman Alberta to work the coal mines. From there they moved to Anacortes Washington where they found work in the sawmills. Eventually, by saving money, dad and his father opened a small family grocery store in Anacortes. His life was one of community service while working  with my mother and the children in the family grocery store. In his retirement he  began  to carve totem poles. For a more complete history of dad's life see this post:    https://paulluverajournalonline.com/weblog/2013/11/dad-1.html

In his retirement he had surgery which make it difficult for him to sit. When he decided to write his memoirs he had to do so standing up, using a two finger  system to type it out on an old portable typewriter standing up. It was a slow methodical process and before the day of computer spellcheck and writing aids. He relied upon my sister Phyllis  to edit his typed work saying things like "Clean this up,, Phyllis, but don't do too much. I want it  to sound like me."She spent many hours editing his work and in the creation of the book.

As to the background, he  says in the preface: "For many 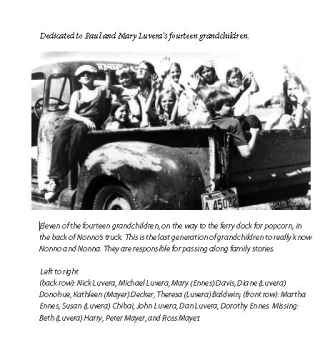 years I have thought about writing my autobiography. There is nothing exciting about my youth or my life as a grown man. It was no different than many millions of other immigrants." But, dad was wrong. His life was a fascinating story about a man who did live the American dream. He was proud to have become a naturalized citizen and became a community leader and a state senator. This is how he summarizes his life in the preface to his autobiography:

"So let us get started. My name is Paulo Nichola Luvera. I was born in Reggio  di Calabia, way down in the extreme south of Italy by the Straits of Messina, March 25, 1898. During the writing of this story, I am 85 years old. My wife, Mary, was born in Anacortes. I came here 65 years ago. My formal education stopped at the seventh grade. All of our three children were born here  and graduated from our high school. My father Nichola and my mother Filippa are resting in our cemetery. With this background, we can get started with my story as I remember it. The first big occurrence that I remember as a five-year-old was my father leaving to come to America back in 1902. But first I will tell you about my family. I hope the recounting will not be boring."

It is written as if dad were sitting talking to you and he is a wonderful story teller. I'm so pleased our family will have this memorial of his life in his own words. My sister Phyllis worked so hard making it all happen that I'm sorry she wasn't alive to see it in print. Her daughters, Dororthy, Mary and Marty assumed the responsibility to publish it and it's a tribute to them all.

Bret Lunsford has written a book Croation Fishing Families of Anacortes which has a chapter about mother's side of the family. The Bababarovich family immigrated from the tiny island of Brac in Croatia to Anacortes where two immigrants met, fell in love and married. I'm pleased we have a written history of both our parents and their remarkable lives as immigrants.

One thought on “AN ITALIAN IMMIGRANT’S JOURNEY”