On an early Friday morning, July 7th 2000, my mother Mary Thelma Babarovich, died in her sleep at the San Juan Care Center. Her  death was not unexpected. After all, she was born on December 28, 1905 and was ninety four years old when she died. She had been in failing health for some time. Her passing was, in fact, a personal blessing to her as she had been ready to meet her maker for some time.

I've published an account of her unique life. https://paulluverajournalonline.com/weblog/2013/07/on-an-early-friday-morning-july-7th2000-my-mother-mary-thelma-babarovich-died-in-her-sleep-at-the-san-juan-care-center-he.htm

She and dad were married 64 years. He was an immigrant from Italy and had died at ninety two years old in 1990.  We children were first generation 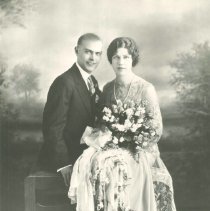 children of an Italian immigrant and a mother whose family immigrated from the area of Split and Brac island when it was part of Austria-Hungry. The two of them represented what made America great. Immigrant families who became citizens and had lived the life of the American dream. Mother’s parent’s story of immigration is one of great courage and sacrifice.

Three brothers living on an Island, immigrated to the United States, and ended up in Washington State. First, brothers of my grandfather Peter immigrated  and aterwards sent money to their wives to follow them to America. Spiro's wife, Jennie and their six children and my grandmother Marija Mattia Vulic' and their five children. The two women and their flock of children traveled steerage on a ship to America and after clearing immigration continued on their trip. Speaking no English, knowing no one, the women and their children crossed the United States ending up in Burlington, Washington where they were to be picked up. John, arrived with team of horses and a wagon. All the trunks and the people were loaded aboard the wagon and pulled by horses they set off for Anacortes a bumpy, rough twenty plus mile trip.  When they arrived at the logging and fishing town of Anacortes with its sawmills. saloons and canneries they found a main street that was a mud road with pigs and chickens running loose.

They spent the night in Anacortes and the next morning women, children and their trunks were loaded on the boat that delivered mail to Sinclair Island where they were homesteading.  My grandmother was pregnant with John Babarovich, who was born on the island in 1903. He arrived unexpectedly while the others were away. My grandfather was the only one there to help with the delivery. My grandmother cut the cord herself and soon was up and working, taking care of the whole family in a place where everything was done by hard labor. In 1904 my grandparents decided to move to Anacortes where there was a Catholic Church and a regular school. Having no boat large enough for their belongings and the family, my grandfather borrowed a scow from Ernest Kasch. Grandmother made a sail out of an old sheet and he mounted it on a mast, created a rudder and loaded it with their belongings and the whole family. He was an excellent seaman and waited for the right tide before shoving off for the trip to Anacortes.

Mother was born in Anacortes, the youngest of eight children, and attended grade school for a time before having to quit and help with the family. Mother and dad met in Anacortes and married on April 7, 1926. They ran a small grocery store together with the help of my sisters, Anita Mayer and Phyllis Ennes as well as my minor contribution. They operated the store continuously until their retirement in 1957.Mother and dad were married for sixty four years.

Mother was very artistic. Her water colors from grade school show great talent. She did extraordinary needlepoint work and rug hooking. She had an eye for 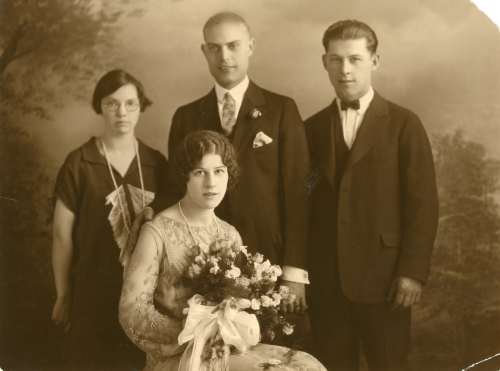 antiques and a gift for gardening. She was so very talented in many ways. Her gardening skills were amazing. She worked very hard at raising flowers and was very well informed about varieties of flowers and plants she loved to grow. She was dedicated to her flowers and after working all day at the family neighborhood grocery store would work outside under lights to finish some project. The yard was ringed with Daffodils and she had flower bulbs that had to be brought in each Winter to be replanted in Spring. Our yard was a colorful and beautiful thing to behold. Her rug hooking was renown. She crocheted and did needle point. She tinted dad’s early black and white photos with color. She hand mounted his slides in glass frames. She drew and colored with skill. She was an artist of many talents in many mediums. She could sew clothes and make clothes.

Almost every son believes his mother was the greatest cook he knew. But her cooking skills were known throughout the community. She had a very large collection of cook books and knew how to use them. The neighborhood children called her "the cookie lady." She cooked the Italian dishes dad loved but she also cooked the wonderful old country dishes her mother taught her from their native land. We were the beneficiary of cooking from both countries. She was a genius at antique collecting before there was much appreciation of what is now a national mania. She had the eye of an artist for color and design. This was reflected in her incredible rock design at the sidewalk entry to our front door. She personally collected buckets of white and black rocks from the beach below our home until she had enough to made the project complete. She drew the design and after dad poured the footing she inserted each rock by hand to complete the design. I have seen similar things in Europe, but never one of this quality. Her cake making was legendary. Designs of castles, baseball symbols, boats and so many other creations the photographs fill many albums.

After dad’s retirement and he began carving totem poles, it was mother who drew the designs, determined the color and type of paint to use and painted the poles. Mother had three children at the time of her death she had fourteen grandchildren, fifteen great grandchildren and eight nieces and nephews. Dad made my sisters a very elaborate doll house and mother made clothes for the dolls. There was very little in the way of creative things mother wasn't wonderful at doing.

My sister Phyllis has published a book of mother's recipe's In Mary Luvera's Kitchen. See my previous post about this: https://paulluverajournalonline.com/weblog/2010/03/mary-luveras-kitchen.html

So, this is in honor of Mary Thelma Babarovich who suffered much from my adolescent conduct, who so often mitigated my deserved punishment from my Italian father's discipline and who stood by me even when she didn't understand my actions. God Bless you mom.