You've read about Diogenes, the Greek philosopher, also known as Diogenes the cynic." He wondered around ancient Greece carrying a lantern searching for an honest man because he believed there was no such person. Current history, especially political history, makes me worry that Diogenes could be right.

We expect honesty and truth from others, but especially our leaders, both political and religious.We read in the Bible: "But, that your yes be yes and you're no, no. For whatever is more than these is from the evil one." (Matthew 5:37) Matthew also quotes Jesus view of hypocrisy: "Woe to you, teachers of the law 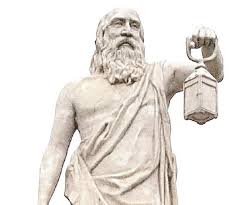 Our current history suggests that lies and hypocrisy are the new norm among many leaders. We can start with the president and the value of his word during his campaign. He has repeatedly broken campaign promises big and small. He's demonstrated hypocrisy by doing many of the exact things he criticized the previous administration for doing. Then there are the congressional members. Tim Murphy, the Pennsylvania Republican, who has announced he's going to resign, is just the latest of the political hypocrites who run for office saying one thing and in their private life do another. Two days before his announcement Murphy had voted for a bill that would ban abortion saying:

"I was proud to both sponsor and vote for this important bill to clearly stand for the dignity and value of all human life, both born and unborn."

But then, the Pittsburgh Post-Gazette published his phone texts to his mistress, who, when he thought she was pregnant, urged her to have an abortion. What about Tennessee Congressman Scott DesJarlais,who in 2015 voted in favor of an abortion ban? He ran with the boast that he had a "100% pro-life voting record" while in Congress." However,  the Chattanooga Times Free Press revealed that he had assisted with his ex-wife decision to have two abortions and encouraged a patient, with whom he was having an affair, to have an abortion as well. Like Murphy he was a cosponsor of the abortion bill that was passed several days before Murphy's resignation.

This kind of double standard appears to be somewhat ubiquitous among politicians. Senator Larry Craig voted against gay marriage and was caught soliciting sex in the airport men's room. Republican Senator. David Venter who made his name as a pro family advocate, but who utilized a Washington madam. The speaker of the house Dennis Hastert had perfect scores from the National Right to Life Committee and the Christian Coalition. Yet, he was revealed as having been a serial child molester and went to prison.

The classic example of blatant hypocrisy in the religious world is that of the Rev. Jimmy Swaggart, the television evangelist. He was famous for his Sunday morning condemnation of sins of the flesh, breaking into tears over the thought of it, while privately indulging in what he was condemning. But, you don't need more examples. We continually learn about the lies politicians and leaders tell the American people in order to stay in office or achieve an objective. It is as if we have trouble being shocked anymore by the conduct. Yet, Frederick William Robertson has correctly said: "there are three things in the world that deserve no mercy, hypocrisy, fraud and tyranny." Maybe the right attitude is the old proverb: "Trust everyone, but cut the cards."