In early September 1814, Francis Scott Key, an American lawyer and amateur poet, accompanied Col. John Skinner to negotiate a prisoner release with several officers of the British Navy. During the negotiations, he and Skinner were informed the British intended to attack the city of Baltimore and Fort McHenry. They were not permitted to leave until the attack was over. They watched the bombardment with apprehension. Inspired by seeing the American flag flying in the morning, after the attack, Key wrote a poem entitled "The Defense of Fort McHenry." Later he set the lyrics to the anthem of existing music. A few days afterwards, the Baltimore paper printed the poem along with the music it named: "the Star-Spangled Banner." The song gained popularity over the course of the century and was often played at public events. In 1916 President Woodrow Wilson ordered it to be played at military ceremonies. 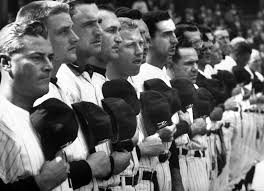 The 1918 World Series was the first time the national anthem was played at a sporting event. The band played the song during the seventh inning stretch of game one while the country was involved in the first world war. When it was played,Red Sox infielder Fred Thomas, who was in the Navy, but given a furlough to play in the series, immediately turned toward the American flag and gave it a salute. Other players Turned to the flag with Their baseball hats over their hearts and the already standing crowd began to sing.

Given the reaction, it was decided that the band would play the song during the rest of the games. By the way, the winning pitcher of game one was Babe Ruth, who pitched a shut out. After the war the song continued to be played at baseball games, but only on special occasions like opening day or World Series games. However, in World War II displays of patriotism were common and involved playing  the national anthem. Baseball games featured playing it during games as well as other public events  Renamed the: "the Star-Spangled Banner" in 1931 it became the national anthem. By the time the war was over the pregame singing of the national anthem had become a baseball ritual. By the end of World War II NFL Commissioner Elmer Layden ordered it to be played at every football game. As a result the tradition quickly spread to other sports aided by the introduction of large sound systems and the postwar patriotism. The result was the playing of the national anthem as a tradition at sporting events in America.

President Trump seems to have the ability to politicize anything he chooses. Over the past week his target was the National Football League and its players  who do not show what he considers sufficient respect for the national anthem by kneeling or in other ways.The result is anger and wholesale controversy.The news media reports about fans burning their football jerseys and others vowing never to attend or even watch a football game involving the National Football League again. NASCAR owners have threatened to fire drivers and crew members who don't show proper respect during the anthem. Mr. Trump has urged football team owners to simply fire players who do not show the respect he believes is required. He has urged fans to not attend games and inflict financial punishment on players and owners for the this transgression.

The primary issue is not First Amendment freedom of speech.That's undisputed and every player and every citizen has a constitutional right in that regard. It's also true that many players are concerned about legitimate issues they are protesting. However, the question really is whether the exercise of freedom of speech is appropriate at a national football league game or any other sporting event.People don't watch football millionaires play the sport because they want to know their political views. They participate and watch the sport because they enjoy the game. The players insist upon the right to exercise freedom of speech as a form of protest and there is controversy among the fans to whether this is right or wrong. Because the issue has come a divisive one involving what should be an enjoyable experience of watching a sporting event, the issue is whether our present practice regarding the national anthem should be changed. Given the history of how it is the national anthem is played at games today, it is clear there is no legal or other hard and fast requirement that it be done as we are now doing. One wonders if we should logically consider changing this procedure. There is nothing unpatriotic about playing the national anthem before the players are present or during the halftime break or even cease the practice altogether. Sporting competitions shouldn't be political events. Today's sporting events are not like the baseball games of the 1918's or even the 1950's during wartime and post-wartime with universal patriotic enthusiasm. Professional sports should not be a place were we test patriotic loyalty.  Right now the sporting fans are emotionally divided in their views with anger and division of opinion among fans, owners and players. This undermines the purpose of the sporting event itself, which is mutual fan enjoyment. Ultimately these disputes distract from the sporting activity itself. Politics should not be the main story of sports. In my opinion a football game is not the place for patriotic loyalty tests. I would change the practice in a way that avoids the dispute and I see that Fox News announced it will no longer broadcast the national anthem before NFL games.

One thought on “POLITICS AND SPORTS – SHOULD THEY BE MIXED TOGETHER?”