Randy Kinnard is an outstanding plaintiff’s trial lawyer in Nashville Tennessee and a Vietnam veteran. He’s also a friend of mine. He recently sent as a gift a small device which makes a loud clicking noise when you press on it. In fact, it’s called “a clicker.” In a note accompanying the gift, he explains that paratroopers had been dropped behind Germany lines in World War II, and to identify themselves to each other they used a clicker which was known as a “cricket.”

I had recalled reading about this and was interested to check the history. It turns out that the device was originally designed and produced as a time keeping method for band and orchestra leaders in the 1920s. It was made by the Hudson & company in England and exported to the United States. 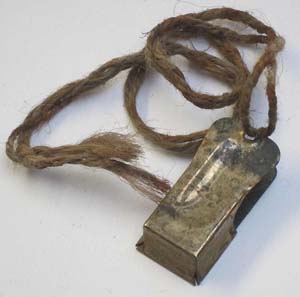 In World War II Gen. Maxwell D. Taylor, commander of the 101st airborne division ordered a supply. He decided that the device would be useful for the paratroopers involved in D day invasion of Normandy in 1944. The paratroopers were going to be dropped in complete darkness into Normandy, behind the German lines as part of operation Overlord. Their mission was to surprise the Germans and prevent them from reinforcing positions defending the beaches where the naval flotilla would be disembarking soldiers on the beaches. The loud noise of the clicker would allow paratroopers to identify friend from foe in the darkness. The paratroopers were instructed to make one click for “who’s there?” The response for “friend” was two clicks. In addition to the clicker, a voice code was developed. The word “flash” required a response of “thunder.” The voice code changed daily. Some of the men hung the cricket around their necks and others kept it in their pocket, but everyone had one with them. In addition to the 101st Airborne Division the 82nd division may have also been issued the same device.

The men agreed that the cricket saved a lot of lives. As one soldier said: “in the dark there was no way I could identify an individual without the cricket. If I yelled, “Halt! Who goes there? Hell, I might’ve been killed. In my opinion, it was one of the most ingenious devices the U.S. Army ever came up with.” Another soldier reported that: “When I landed at about 2 AM, it was darker than pitch. I was totally alone in the field, and the tracers were going all around me. I couldn’t find anyone, so I went over to the nearest cover I can find, a hedgerow, and I heard someone coming. I waited for the sound to get closer because I wanted to be sure that whoever was would hear my click. As the sound got closer and closer, I finally clicked. Sure enough, the person approaching me, someone from the 101st as it turned out, he clicked his cricket and we were both okay.”

Unfortunately, the Germans obtained clickers when they captured American troops and used them to lure some paratroopers into capture. The invasion took a heavy toll on those who had parachuted as well as those on the beach. Heavy fog and enemy fire caused pilots to break up their formations. Paratroopers were discharged under adverse conditions. Many of them died when they landed in rivers and drowned from the weight of their gear. Others were shot and killed during their descent. By nightfall on June 6, more than 9000 American and allied troops were dead or wounded.

I was pleased to receive this small object from my friend, because of the significant history behind the device. We are truly indebted to all of those who sacrificed so much in World War II.

0 thoughts on “THE CLICKER”