Everyone makes mistakes. Everyone can be blind to the truth because of their bias about their position on an issue. It’s a fact that almost all politicians are regarded as untrustworthy about the truth when political consequences are involved. But the majority of people generally are truthful and past presidents have been careful about their representations because of the media checking on them. None, in recent history, have made it a practice to make totally outrageous fabricated claims about important national interests and then repeat them even after being exposed as completely false.  So, how do Trump supporters excuse and brush off President Trump most recent fabrications. They are not mistakes of trivial matters. They relate to a painful shut down of government impacting millions of Americans. Yet, they are totally false and one hundred percent fabrications. Not just one, but multiple lies and here are the most blatant lies:

2. Former presidents have told him they wanted to build a wall and say they should have done s Totally made up fabrication. All of the surviving presidents, including George Bush, have flatly denied this and have denied ever talking to Trump about it.

3. If elected Mexico, not U.S. taxpayers would pay for the wall. While this promise was repeatedly made, it was quickly abandoned shortly after former Mexican President Vicente Fox said on public television: “I’m not going to pay for that fucking wall.” In an interview of Vice President Mike Pence on Tuesday, news reporter Jon Karl suggested it was Trump’s fault that we were “in this 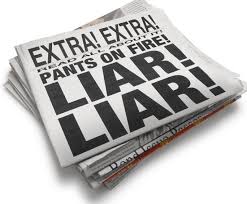 mess in the first place,” because he had promised that Mexico would pay for the wall.” Karl went on to say:

“But why are we in this mess in the first place? The president said over and over again, in fact, you said that Mexico was going to pay for this wall so now he's shutting down the government so that — to force taxpayers to pay for the wall. I mean, that was a promise that he didn't say once or twice or three times he said over and over again, Mexico is going to pay.” As Pence explained the re-negotiated NAFTA deal and other new arrangements with Mexico that would benefit the U.S., Karl kept obsessively pressing on that past statement.“But that's not what he said. He didn't say he was going to renegotiate a deal. He said Mexico was going to pay for it!”

4. Promised to take full responsibility for a government shut down and not blame Democrats for it. On national TV he told Democratic leaders: "I'll tell you what, I am proud to shut down the government for border security. So I will take the mantle. I will be the one to shut it down. I'm not going to blame you for it.” Later in the day, at a bill signing, he repeated his promise saying, “I don’t mind owning that issue.” Within a few days he claimed the shut down was top Senate Democrat Chuck Schumer’s fault. Next, he put the blame on House Speaker Nancy Pelosi. Now he insists the shut down is the fault of all the Democrats running to replace him 2020.

5. The White House claims nearly 4,000 terrorists sneak into the U.S. from Mexico every year. This claim involves data about all individuals attempting to travel to the US by air, sea or land, and includes those who made efforts to obtain visas from embassies and consulates around the world. In July 2017, the State Department said there was "no credible information that any member of a terrorist group has traveled through Mexico to gain access to the United States." The administration's suggestion that tighter southern border security is needed to stop thousands of terrorists stands in contrast to the government's own statistics on the issue. According to a senior administration official familiar with Customs and Border Protection data, roughly a dozen individuals who are not US citizens and are on the terror watchlist were encountered on the southern border between October 2017 and October 2018. But it should be noted that large portions of the immigrants being arrested at the southern border committed nonviolent crimes, like illegal entry or re-entry — the act of crossing into the US illegally — and driving under the influence of alcohol. Customs and Border Protection statistics also measure immigrants convicted of crimes in the US or abroad.

In the book Gone with the Wind Margaret Mitchell wrote: The liar was the hottest to defend his veracity, the coward his courage, the ill-bred his gentlemanliness and the cad his honor.” President Trump responds to any critical or unfavorable reporting about him or his claims as “fake news.” He has accused Google and other big tech companies of conspiring with the fake news and has labeled books as “fake” as well. Winston Churchill has said: "Truth is incontrovertible, ignorance can deride it, panic may resent it, malice may destroy it, but there it is." Let’s hope he was right.