Let's start the discussion of President Trump's demands of Billions of dollars for a wall with what is a billion? Well, a billion seconds ago it was 1959. A billion minutes ago Jesus was alive. A billion years ago our ancestors were living in the stone age. If we wanted to pay a debt of $1 billion dollars by paying one dollar every second, it would take 31 years and 259 days. President Trump demands $5.7 Billion dollars as a down payment towards the total cost of the wall for which experts have given various estimates of Billions of dollars.

The border with Mexico extends 1,954 miles from coast to coast. There are no reliable estimates to the actual cost of such a wall but one study found that it would cost $15 to $30 Billion dollars. It is estimated that it cost upwards of $2.8 Billion per mile considering the difficulty of construction. Supporters have argued walls have successful kept people from illegally crossing the border citing Israel and Gaza. But, that wall is only 40 miles long. It's true countries have erected temporary barbwire  fences to slow immigration along border routes, but there is no comparison to the length or cost of the proposed U.S. – Mexico wall. Not only that the 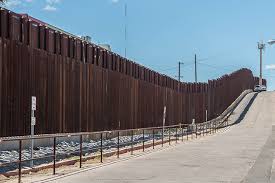 But, that's not the most important aspect of  President's government shut down. It begs the real issue involved in President Trump crossing his arms and creating a government shut down until he gets the Billions he wants. That issue is the monumental lie he told to his supporters. That lie was that Mexico, not American taxpayers, would pay for the wall. Senator Lindsey Graham, Republican from South Carolina, a totally unprincipled politician, backed the president's shut down on Fox news and praised him for it. Why? Well, Graham said: "The one thing I like about President Trump – he's trying his best to keep his promise. He promised to build a wall, and he's going to fight hard to keep that promise." Now, I ask you. Can you believe the hypocrisy of that statement? Senator Graham is only half telling the truth about the promise. Throughout the 2016 campaign and on his website, President elect Trump promised his administration would build a wall along the U.S. – Mexico border to control illegal immigration. But, he always added to that promise another equally essential promise: Mexico would pay for it! It was a two part promise. A wall would be built and taxpayers wouldn't have to pay for it. In fact, he repeated that double promise so many times during the campaign all he had to do was to shout out: "What are we going to build?" and would get back an instant response "A Wall." He'd then Shout "And, who's going to pay for it?" with the response: "Mexico!"

If Senator Graham is such an admirer of President Trump keeping campaign promises how can he turn a blind eye to the most important part of the campaign promise of a wall that Mexico, not U.S. tax dollars would pay for? Why isn't he and all the other spineless politicians calling out the President for going back on his campaign promise and lying about it? Why isn't there outrage over presidential dishonesty. Don't they put scammers in jail who promise to provide something of value to you free, only to then insist on your paying for it or suffer consequences. President Trump promised Americans he would build a wall for free and after he was elected insisted they had to pay for it or suffer the punishment of a government shut down. That's fraudulent and dishonest. Both parties should be calling him out for shutting down government over his lie about it not costing Americans a dime.