If you haven't seen the documentary Won’t You Be My Neighbor? which traces the life of  TV host Fred Rogers and his television program of that title I recommend it to you. The documentary was directed by Oscar-winning Morgan Melville.There were 1765 episodes of the program from 1968 two 2001. Rogers died of cancer at the age of 74 in 2003. He was a graduate of the Pittsburgh theological seminary and an ordained minister. He was married to his wife Joanne and raised two sons John and James. 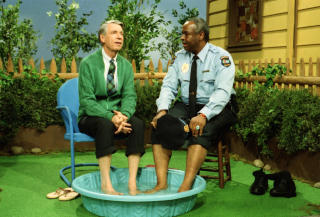 The program featured the song "Won't You Be My Neighbor?" with lyrics most of his young viewers knew the words to by heart:

Rogers welcomed children into his TV house by walking in, hanging up his coat and putting on a sweater as well as casual shoes. He would talk with objects like Picture Picture, visit with a friend or two and then a trolley would take viewers to the neighborhood make-believe world

Rogers took his job very seriously. He was detail focused on the message he wanted to convey to children and everything that was presented had a serious purpose even if presented through puppets. He was responsible for the scripts and the way the program was presented. He worked with a unusual dedication for a program directed to children.

The most important message he conveyed was that he wanted children who watched his program to know that they were loved “just the way you are.” His song, "I Like You as You Are", had the lyrics that express this idea

When Rogers talked to people, especially young children, he was an intense  listener. He never looked past them or checked his watch. He sincerely took each one of them as seriously as he would an adult.

He also addressed cultural issues of the day in a straightforward but gentle manner. When southern hotel owners were trying to force African-American swimmers to get out of their swimming pools, Rogers was washing his feet in a wading pool with the program's neighborhood black police officer Clemmons. In the same way he dealt withj sensitive subjects involving everything from war and assassination to death, grief and even divorce.

Rogers is quoted in the documentary is saying “love is at the root of everything. All learning, all relationships, love or the lack of it."  Rogers read the Bible constantly. Rogers acted out his ministerial calling in a unique way through his television program focused on children. His story is an inspiration in the present culture of name calling, bullying and violence.