According to a New York Times op-ed by Paul Krugman, we as a nation are suffering from an "epidemic of infallibility."  No one, president or not, wants to admit to wrongdoing, at least not publicly. When people do apologize they often say they are sorry, but offer excuses or rationalizations which is no apology at all. I hear politicians and prominent people who have made public mistakes for which they offer an apology, but not without combining it with an excuse, a rationalization or blaming someone else. Those kinds of responses make the situation worse. Instead a clear and honest admission of fault is the 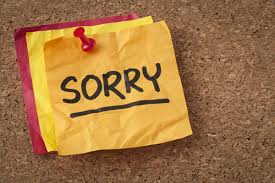 key to remedying the harm of mistakes for which we should apologize.

It has been pointed out:

“An apology is the simplest of acts: the speaking of words of genuine regret to another for having harmed, denigrated, or insulted them in some way. And yet it has almost magical power to repair fraying relationships. Most of us seem to be more judgmental of the intent with which a person acts than of their actions' outcomes. Even when someone acts maliciously toward us, if he later comes to regret it genuinely, almost to view his earlier self as a different person from his present regretful self, that kind of contrition rarely fails to move us.”

What do we expect from people who are clearly wrong and have caused damage to someone else? We expect these responses.

An apology involves (1) acknowledging your actions (2) Acknowledging you were wrong (3) expressing genuine regret (4) assuring it won’t happen again and (5) offering a remedy to try to make it right. So what are the key elements of a proper apology? They include:

When the time comes to deliver the message clearly tell the other person you're sorry.  Express regret genuinely and be sincere in your tone. Don’t be indirect and vague, expressing regret about "what happened." Instead, tell them directly that you're sorry about what you did.

2. Show you understand the impact of your actions.

Take the other person's perspective. Really try to imagine how it felt for them to be the recipient of what you did. For example: "I'm really sorry that I said that to you. I was really angry, but that's no excuse for saying what I did.  I can only imagine how hurt you must have been about what I said…"

3.  Request forgiveness and express your intention to change.

Request forgiveness and express your intention to change. For example:  "I'm really sorry that I said that to you. I can only imagine how hurt you must have been about what I said.  I promise I'll work on controlling my emotions and never say something like that again."

Offering to make up for the harm done or providing an appropriate remedy is a key part of a proper apology. For example, suppose a child hits a baseball through a neighbor’s window. We expect the child to go to the door and tell the neighbor it was his or her fault, they are very sorry and offer to pay the full amount to replace the window. You don’t expect the child to say “I’m sorry but it was the pitcher’s fault for the way he delivered the ball. Besides, I shouldn’t have to pay for a new window. That one was old.”

We all need to learn how to say we are sorry and to say it when it is called for.