I wouldn't call the two nights a "debate." A debate involves people in disagreement about the same subject who are given equal time to convince judges which side has the correct position on the matter measured by their logic and delivery. That's not close to what these TV shows are because, at best, they are a brief preview of the people running for president while trying to impress voters. As conducted, they do not provide equal time to each candidate, nor do they allow all participants the right to respond to the same issue or question. They give the moderators arbitrary power to decide the time allocation of answers as well select who participates in questions. The time limit is abused by the candidates because the moderators do not know how to effectively limit or sanction a candidate ignoring the rules. In that regard, the simplest solution would be a microphone shut off switch controlled by the moderator. Some moderator, just as some candidates, are better than others.

Here are is the mob that would like to have Donald Trump's job and think they can run the country: 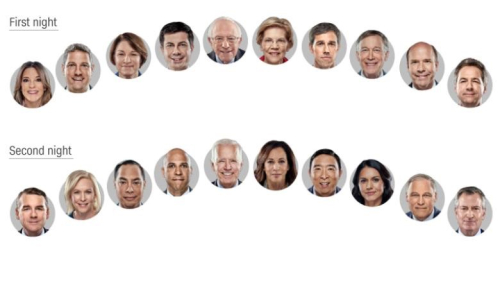 How did they do? Well, it depends upon your bias and your viewpoint. How do you pick a candidate? I think it has three criteria: (1) someone who has the same general views as you do about important issues (2) someone who has the leadership experience and skills to implement them as a leader and (3) someone who can defeat Trump while dealing with his untruthful political personal attacks.  My overall reaction to the candidates performance was disappointment. As a trial lawyer and one who has given literally hundreds of speeches to lawyers over the years, I was totally disappointed in all of the candidates communication skills. When you know you only have a limited time, in minutes. to speak, every word counts and you don't have time for speeches, discussion of your plans or political stump speeches. You need to speak in short sound bites giving simple and powerful responses. Responses should include analogies and metaphors. The best of the group in that regard was Buttigieg, Gabbard & Yang.  Think back to the 2016 Trump – Clinton exchange over immigration. She gave a long outline of her plan for different groups of immigrants. Trump, on the other hand, had one response: "Build a wall and Mexico will pay for it." Intellectuals were repulsed by his solution. Voters tuned out Clinton's involved solution and connected with a simple understandable Trump solution. Candidates talked too much, too long and too often about themselves instead of what concerned voters. Using my three criteria for who to vote for here is my scoring:

A very likeable man who was seen as a potential strong candidate but who came across as flat & uninspiring SCORE: C

This is an extremely bright and intelligent man who has solid ideas as well as the knowledge for needed changes. Very impressive person with good ideas and demeanor. His lack of political experience, age and his same sex marriage raise serious questions about his ability to defeat Trump given the need for conservative voters. SCORE: A-

He was professionally poised and had good responses, but lacks any required charisma or leadership demeanor. SCORE: C+

This is a ethical and honorable person who served as governor well, but is past prime for taking on Trump or the presidency. SCORE: C+

Strong and bright person with solid ideas, but isn't up to the assault by Trump and is not electable SCORE: C+

A sincere and bright young man who looks like a college student. Given his age and lack of political experience his time hasn't come yet. He needs to serve in the trenches for awhile longer before being up to being president. SCORE: C

Good looking man who is the size of a professional line backer. He had good responses, but his lack of political notoriety  and his failure to demonstrate that he had the qualifications for the office hurt his chance of beating Trump. SCORE  C

I think he is a very ethical and sincere person and I like much of what he advocates, but I don't see him as electable with the need for conservative and moderate voters given his progressive ideas which frighten taxpayers. Plus his age is a problem as is his angry delivery of his ideas. I think he would be an easier target for Trump to beat than Hillary. SCORE: C+

I have always liked her courage and outspoken honesty. However, her views are essentially the same as Sanders and she is more strident in her delivery than he is. She needs to learn professional demeanor and calm leadership qualities instead of conveying a radical extremist attitude. Instead of calm leadership demeanor she projected shrill, excitable and impulsive behavior.  She has the skill and courage to take Trump on in hand to hand political fighting or debate, but  I don't think she can beat Trump. SCORE: C+

For me, this is a mystery woman. How did she get to this position and what were her qualifications? That's a big drawback for getting elected.  She had some solid answers during the discussions and her demeanor was good as well, but her summation was ineffective. I don't think has any chance of beating Trump. SCORE: C-

A well reasoned ideas and has professional poise. Solid thinking on issues and could deal with Trump in debate. However, he doesn't have demeanor or appearance of leader. Questionable ability to beat Trump. SCORE: C+

I admire Joe for his ethical honesty and sincerity as well as his contribution to our country. He doesn't have the needed mental quickness and competitive skill to handle Trump. He is clearly showing his age; he is too connected to his past politics; he lacks the debate mentality needed for hand to hand political fighting and it is really questionable if he is up to the job of president while he would restore the office. SCORE: B-

I had regarded him as a show boat politician, but he demonstrated outstanding skill at being articulate, having a good grasp of issues and being a competitive debater. I like his professionalism and he is a big man with leadership demeanor. My sole concern is the electability of an African American after all the hate attacks on Obama and having to run against a racist like Trump. SCORE: A-

A very nice and decent man who had good answers and was articulate as well. His Cuban background could be a plus. I question his toughness to deal with Trump in debate. He lacks the appearance and demeanor of a leader as well as the charisma needed to be elected. SCORE: C

I admit starting out with a bias against him because of his political history as mayor of NY. He is a blow hard who hoped to get attention  by making unprofessional attacks on Biden and came across as being someone without a plan or answers to our problems. The fact he is involved in an inner racial marriage is either a plus or a minus for election, I'm not sure which. SCORE: D-

I had real reservations about her as a light weight from Hawaii who was unqualified in leadership demeanor or experience. I must say I was very impressed with her answers, courage and general demeanor. She took on Kamala Harris for her bullying of Biden, showed independent courage on issues and was very articulate on issues. I think she is fully capable of debating Trump. My only reservation is whether her youth and the fact she is a woman running in a white, male dominated country can get the votes needed to beat him. SCORE: A-

She is strong, bright and determined. I was offended by her attempts to get attention by her treatment of Biden, insisting he answer her questions as if she was cross examining him. Furthermore, I resent excessive assertiveness to refuse to stop talking when told to do so. She was too unprofessional and shrill, but I acknowledge she can be coached to correct these defects. SCORE:  B-

I was truly offended by her performance. She projects a smug, conceited arrogance. Her bullying treatment of Biden was shameful and done solely because she had gotten attention from doing it in the previous debate. She has a record of unethical as well as unlawful conduct in role in law enforcement in California. She repeatedly tries to use race as a means of attracting votes. She repeatedly refused to stop talking when told to do so and simply ignored the moderator. She bragged about herself excessively. Her anger and conceit make her a poor candidate or president. SCORE: D-

My bias is that I have financially and politically backed Inslee since his days in Congress. After the first debate I questioned his ability to be a factor in this election, but last night was very impressive. He needs to stop talking about his accomplishments and instead refer to changes in Washington he supports.  He looked, talked and acted like a president. His answers were solid. His demeanor professional and his performance very impressive. He has the competitive skill to take Trump on and is electable. SCORE: A

Like Williamson I couldn't figure out why this man would be considered presidental, but after listening to him I was very impressed. He is intelligent like Buttigieg and just as articulate. He has a good grasp of issues and very articulate. He stayed within his time, gave a great closing and otherwise projected knowledge and a grasp of issues. His idea of $1000 a month to Americans reminded me of the Townsend plan of 1933 that proposed paying every American over age 61 $200 a month (which inspired Roosevelt's Social Security program) It's financially not feasible and too progressive for the voters we need to reach. His lack of political experience is a drawback as well. He is very capable of taking on Trump, but I am concerned about his electibilty, SCORE B

it will be interesting to see what the fall out actually is from this second round and who survives as well as who doesn't survive. Let's also not forget how critical the election to the Senate is as well. We need to get rid of Moscow Mitch, the spineless Senate leader.