Just when I had made up my mind not to write about the coronavirus or President Trump, Mr. Trump has done it again. I can't sit silent when he once again attacks reporters for asking relevant questions with a childish tantrum and while  so badly mistaken about his constitutional power. On Monday President Trump conducted a shouting exchange with reporters involving name calling and interrupting. He took the occasion to repeatedly claim he had the ultimate  and final power to 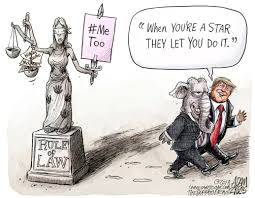 This not the first time Trump has made totally false claims about his presidential power. For example, in a speech back in July 2019, he asserted, "I have an Article II, where I have to the right to do whatever I want as president."

Disgraced former president Nixon made similar presidential claims of  power during a 1977 interview after his resignation. David Frost, citing his various unconstitutional actions during the Watergate crisis, asked: Would you say that there are certain situations,” Frost asked, “where the president can decide that it’s in the best interests of the nation, and do something illegal?” Nixon’s reply became infamous. “Well, when the president does it, that means it is not illegal,”

Trump’s reliance on Article II for his mistaken idea is misplaced. The Article and the Constitution do not give the president this kind of power. Article II provides:

Furthermore,  the federal government is divided into three branches:  the executive power, invested in the President, the legislative power, given to Congress  and the judicial power, vested in one Supreme Court and other federal courts created by Congress.  The Constitution provides a system of checks and balances designed to avoid the tyranny of any one branch. Tyranny of a president under our constitution is only possible when the three branches lose their independence and their power to check the actions of another branch. That can happen under the constitution by loading the judiciary with people who are selected because of a political or religious agenda and electing legislatures who have similar goals. By abandoning their duty of holding the president accountable, he or she can quickly become despot.

It has been argued that it  is way past time for Congress to rein in unconstitutional assertions of executive. Meanwhile, President Trump needs to adhere to his Article II oath: "I do solemnly swear (or affirm) that I will faithfully execute the office of President of the United States, and will to the best of my ability, preserve, protect and defend the Constitution of the United States."