In 1999 the World Trade Organization held a convention in Seattle. But, the convention meeting was quickly overshadowed by street violent protests outside the hotels and convention center. There was rioting, damage to buildings and violence from a crowd estimated at some 40,000 people. The event lasted over several days and became known as the "Battle of Seattle." Yesterday's Seattle riots resulted in more damage and destruction then the Battle of Seattle. 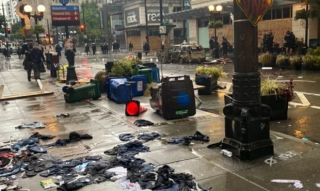 demonstrations grew chaotic when, within s few hours, a separate group began burning, looting and destroying everything possible. Cars, including police vehicles, were torched. Looting was extensive and Molotov cocktails were thrown. Police discharged tear gas filling the air. Multiple people were injured during the riots including police officers. Protesters confronted officers and were throwing water bottles and fireworks. Flames and black smoke came from burning vehicles people began looting in the Westlake wall shopping area. Groups of people grabbed merchandise by the armful from stores. While downtown businesses have been damaged in the past in Seattle with protests it was never to the extent of this damage. Some broke into Nordstrom Department stpre and began throwing merchandise to the crowd.Nearly every storefront near Westlake Center was shattered.  Unfortunately, many of the businesses that were targeted had been closed for weeks because of the pandemic and were already facing extreme financial hardship. Southbound Interstate 5 was closed after protesters walked on the highway.

After extensive damage had been done, Mayor Jenny Durkin issued a two night 5 PM to 5 AM curfew. Gov. Jay Enslee called up 200 National Guard troops for the next seven days at the request of the city. This was the first time the National Guard had been called into Seattle since the riots of 1999. In a statement issued just before 1 AM, SPD Chief Carmen Best described the overnight policing efforts. “Currently, we are still addressing a number of groups of offenders who continue to assault officers and loot the downtown core, indiscriminately,” she wrote. “The National Guard is assisting in controlling the situation downtown. We will continue to respond swiftly to all acts of violence and destruction.” These responses were long after the damage had already been done.

Admittedly, I know very little about crowd control, rioting and law enforcement appropriate action in a situation like this one. Certainly, I also concede these events are relatively rare and particularly so in Seattle. However, the issue of proper crowd control in a situation like this is not a new one. There are established procedures that law enforcement is trained to use. There are classic crowd control formations, appropriate equipment for protection of the officers, pre-planning outlines with protocols, medical and fire assistance available, proven crowd control formations and other known techniques that are taught to law enforcement in situations like this. I'm not aware of any pre-protest planning by the Seattle police chief or Mayor Durkan for this kind of crowd response even though other cities including Portland had experienced it. The mayor didn't call for a curfew or ask the Governor for National Guard assistance until it was totally too late. Seattle Police Department Carmen Best issued a 1:00 am statement, long after the damage was done.

As someone without training or experience in dealing with situations like this, my question is where were the law enforcement personnel? Why wasn't there advance planning by the Mayor and Chief of police given the out of control crowds in other cities. Why hadn't the Mayor and Police Chief been prepared for the likely protest violence when it had occurred in other cities? The pictures I saw on television showed crowds of people totally unrestrained in any way burning vehicles, breaking into stores and doing whatever they wanted to do with little or no law enforcement restraints.  I saw barricades and police protecting the municipal building some distance away but not at the scene where the vandalism was being carried out. After extensive looting, burning and damage there was a police movement to move the crowd with tear gas and other devices, but by then the damage had been done. What is the reason this situation wasn't anticipated and planned for to prevent this from getting so out of control? Perhaps we'll learn the answer as the facts become known, but it was very disheartening and shocking for me to see this happen in Seattle.