Mondays killing of George Floyd in Minneapolis was another in a long list around the country of questionable killings by police officers of citizens, especially African American citizens. The death of George Floyd caused by police officer Derek Chauvin is particularly incriminating. It clearly shows an intentional and unnecessary killing of a citizen who was not armed nor resisting arrest.

The video shows a man with his arms handcuffed behind his back while the police officer kneels on the man’s throat. Floyd gasps out “I can’t breathe” 12 times while the officer continues to keep pressure on his neck. Finally gasps “I’m about to die. They’re going to kill me.” He calls out for his mother and dies. For eight minutes Chauvin 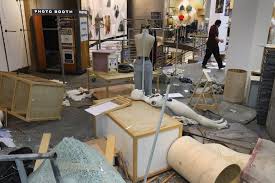 ignores  all of the Floyd’s pleas. It’s hard to imagine a more deliberate and callused murder. Worse, there are other officers standing there witnessing the situation and do absolutely nothing to interfere.

When the video was made public the city’s reaction was to fire Chauvin and the other officers but not arrest him or file charges until there was a riot. When charges were filed it was against Chauvin only and for the least serious of possible charges for causing death. The police officer should have been immediately arrested and promptly charged with second-degree murder. The other officers should have been arrested and investigated for appropriate charges. That failure resulted in rioting in the city. The city seemed unprepared for the inevitable response had considerable damage plus looting occurred.

African Americans and other marginalized citizens have the right to expect accountability for police crimes against them involving abuse of their power. Yet they, and the rest of America, have witnessed over and over again a failure by government to hold the police and others accountable for their crimes and abuse of their power. The constitutional concept of legal accountability applies to all citizens including the police and the public both. This accountability includes people who respond to injustice with violence, riot and looting. The reaction in Seattle and Bellevue to the Floyd killing involved arson, violence and looting. In Seattle the news showed two groups protesting.  It began with peaceful protesters demonstrating and later another group arrived. The last group was filmed arriving with backpacks full of explosive devices, fuel for arson and other devices to cause damage. This group began a rampage of graffiti, broken windows, setting police cars on fire and breaking into businesses for looting. Nearly every storefront at the Westlake Center was damaged. The news showed people carrying armfuls of clothing and other property they stole and looted from the stores. There was little if any police confrontation and the crowd seemed to be allowed to do what they wanted for a significant period of time and after considerable damage to downtown Seattle shopping center.

The next day, the city of Bellevue was hit by a crowd who invaded the shopping center, smashed the windows and doors of stores and department stores to begin looting. Groups of people freely moved in and out of the stores carrying armloads of clothing and goods they had stolen. While this was happening there was no police interference and the crowd was unrestricted in their criminal acts. That raises serious questions about the police response in both Seattle and Bellevue to promptly and properly respond to the situation they had to know was likely to occur. However, it appears the police in both cities were unprepared for the extent of the rioting conduct. And, when the police did respond they did so after extensive damage and looting. Their response was  too late to prevent the extensive damage done in Seattle or the looting of stores in Bellevue.

Since the rioting, a significant question has been raised about the crowd reaction involving accountability. It has been suggested by thoughtful people that the crowd  reaction of violence, arson and looting are an understandable outcome as a result of the continuing failure of leaders to hold the police accountable for their actions. The suggestion is this rioting is a direct consequence of how groups of society, particularly African Americans, have been treated economically and politically in America. The actions of the crowd, they argue, is understandable and justified or at least should be tolerated because of the injustice that they have endured.

My view is that this idea is not logically, morally or legally accurate. I believe that we must hold people personally responsible for their actions and be held accountable for their conduct. Most people agree that there has been a failure to effectively and fairly deal with racism in America. Most people agree that the police and law enforcement generally have not been held accountable for their abuse of power particularly involving people of color and the African American community. However, that fact does not in any way justify a response of arson, violence, rioting and looting because these actions are intrinsically illegal and immoral actions in a constitutional country. Looters carrying armloads of stolen goods out of stores cannot be equated with legitimate protesters on any logical basis. These are not starving people stealing food to feed their children. These are not legitimate protesters. These are people who have taken advantage of a situation and are common thieves who should be held accountable and prosecuted.

The two most well-known leaders of protests involving abuse of human rights are Mahatma Gandhi and Martin Luther King. Both did advocate violating civil laws as a protest against unfair government abuses of power. Gandhi advocated violating laws relating to the British rule over India. King advocated violating laws calling for separation of races in America. However, throughout their lives they consistently advocating peaceful protest. They strongly condemned violence, arson and looting as a means of achieving the goals of human rights. In fact, both died as a result of violence they condemned by assassination.

The historical fact of unfair and discriminatory treatment in America is undeniable. The overwhelming frustration of people being discriminated against without any change of significance is understandable. The demand for an end of these unfair situations is also fully understandable. However, that does not excuse nor call for toleration of looting stores, burning buildings or violent acts. In both logic and morality, it is undeniable that the end may never be said to justify the means. Just because these actions are understandable doesn’t take them right.

The wrongdoers, whether police or citizens, must be held accountable and responsible for their actions in a constitutional nation like America.