Unless you have been living in a cave, everyone knows about what was called the "Capitol Hill Autonomous Zone" (CHAZ)" and is now known as the "Capitol Hill Occupied protest (CHOP)." The city area involved originally covered six city blocks and a park. Protesters of the George Floyd killing created it on June 8th.The Seattle Police Department blocked the protesters access to this area of the city who wanted access to the city police precinct building located there. The police continued to block the crowd from proceeding, but only 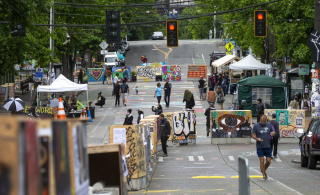 until the building was secured with plywood and sealed up by the city. At which point the police abandoned the area to the crowd who swiftly took over the property surrounding the precinct building and created the zone. The protesters erected barricades to block street access, set up tents and began covering the area with graffiti and temporary structures. It wasn't until June 16th, with traffic blocked from entering the area, Mayor Jenny Durkan announced concrete barriers would be installed in the area occupied with one lane left open to allow access by emergency vehicles. She also announced that the police would not be allowed in except to respond to life-threatening crimes. The concrete barriers were even encased with plywood to allow occupiers to paint messages on it. This created an area with traffic blocked off with barricades as well as a zone without police, fire department or city government presence or law enforcement. Throughout the occupation of the area, the chief of police and the mayor have dealt with the situation by what is best described as an approach of "can't we all just get along?" The mayor explained her inaction by saying the city must balance demonstrators "first amendment activities" and "public safety and 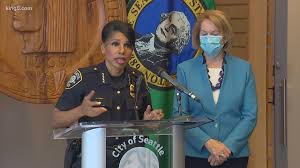 allowing access for residents and businesses who operate in the area" to explain why no action had been taken.

That was the situation until last Saturday when two shootings occurred on the edge of the zone. One person was killed and other seriously injured. Police investigators and Fire Department medics did not reach the shooting scene Saturday morning, citing unsafe conditions. Both victims were taken to Harborview Medical Center by private citizens, while Fire Department medics waited outside the protest zone, citing standard policy to wait for police to declare potentially dangerous areas secure before entering. The chief explained: “They were faced with a hostile crowd and made a tactical decision to leave the area for the officers’ safety and for the safety of the crowd" she said.  In the meantime the wounded man remained in critical condition as of Monday morning in the intensive care unit at Harborview Medical Center. Less than 48 hours afterwards another man was fatally shot in the protest area. The Seattle Fire Department arrived at the scene but were told by the protesters the injured person has already been taken away, transported to the same hospital via private car. The person was in serious condition a Harborview Medical Center spokesperson said in a statement.

During all of this, rthe Mayor was silent and had no comment for the news media. Then on Sunday evening, in her first public statement on the shootings, Mayor Jenny Durkan responded to the shootings by saying “thousands of peaceful demonstrators gather almost daily” on Capitol Hill, but acknowledged there were “more dangerous conditions” at night. At the same time she was continued to be lambasted in the media for a CNN’s interview during which she suggested the occupied protest around the city’s east police precinct could simply be a “summer of love.”  When asked, Police Chief Carmen Best was quoted as saying she wants to retake the police precinct in the self-declared "Capitol Hill Autonomous Zone," or "CHAZ," “as soon as possible.” “Ideally, we just need to get back into the building,” she said. However, the head of Seattle's police union lamented the lack of "leadership" in the city. In the latest development, Mayor Durkan told the media the police department will return to its abandoned precinct building "peacefully and in the near future"  but wouldn't give a time table. Instead, she said the city would attempt to phase downtown night activity in the protest area by "asking people to leave the area voluntarily at night." No other solution or plan has been suggested by the mayor or police chief In the meantime, the city council members are staying quietly in the background.

However, the store owners in the area are  still unable to conduct business. People who live in the area still suffer noise and fear for their safety. The area has been covered with messages and graffiti. The "zone" remains an island of no police, no fire protection and no ambulance service. It still is an island of anarchy. Let it never even be whispered that I ever agree with Donald Trump and I don't, but I would never have thought a city the size of Seattle would tolerate it's police being driven out of their station by crowds of people and having to board it up to protect it from occupation and damage. It's hard to imagine police, ambulance and fire department crews unable to enter the area by the people occupying it who claim it is an "autonomous" zone. Nor would I have expected a Seattle mayor and police chief to respond with a solution of asking the occupiers to "voluntarily leave." It's to hard to believe this is happening in Seattle.

Should people be allowed to peacefully protest the wrong of racial discrimination and police abuse of power? Absolutely, it is a constitutional right. Should they be allowed to disrupt normal daily activities and city affairs? Yes, if done without violence and for reasonable periods as well in a reasonable manner. The question in Seattle however, is should the Chief of Police stand by while protesters take over a section of a business and residential area as well as having the police abandon their station on the demand of the crowd? Should the Mayor allow the situation to continue with no steps to restore civic order and laws? Is it a reasonable plan for a solution to ask the occupiers to voluntarily leave on their own choice?  The answer is obvious to any rational person who doesn't allow political considerations to dominate the duty of leadership. A mayor's obligation is to lead and to reasonably enforce the laws which protect the citizens rights. The chief of police is charged with enforcing the law and maintaining order in a reasonable manner. Yes, that doesn't mean pepper spray, rubber bullets, tear gas and the acts of the Seattle police we've seen previously, but it doesn't involve the police standing around with their hands in their pockets while there is anarchy in the streets either. But, law enforcement crowd control and restoring order are obligations competent police chiefs in major cities are supposed to know.  Mayor's are elected to lead and there are times they are called upon to do the difficult thing that will potentially hurt them politically. That goes with the job and with strong leadership.

Both leaders have abandoned their duties. We need to send a search party out to find the mayor and the chief until they decide to come out of hiding and do their job.