In 2008 a television miniseries about John Adams, his political life and his role in the founding of the United States was televised. Actor Paul Giamatti played the role of John Adams. It is a reminder of what an enormous undertaking the Revolutionary War was against such a formidable United Kingdom. The people who were responsible for the founding of this country. were extraordinary. The documents they created, the Declaration of Independence and Constitution of the United States are unique. Here are some of the main players.

Benjamin Franklin was one of the founding fathers of the United States. Franklin was a leading writer, politician, scientist, inventor and diplomat. He was 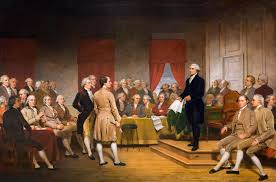 known for his discoveries and theories regarding electricity. He invented the lightning rod, bifocals and the Franklin stove among other inventions. He founded civic organizations including the first fire department and the University of Pennsylvania.

He has been known under the title of "the First American" for his early campaigning for colonial unity. He was the first ambassador to France and laid a significant role in the drafting of America's founding documents including the Declaration of Independence and the Constitution.

John Hancock, signer of the Declaration of Independence,  owned the ship Liberty which was seized by customs for smuggling tea without payment of tax which the Crown had imposed on colonial tea companies and he was charged with a tax crime. He was defended by John Adams and was acquitted. When a ship owned by the company favored by the British arrived in Boston harbor in November of 1773 with a load of  tea from China, protest meetings were held. Samuel Adams, John Adams cousin, and a group pretending to be Mohawk Indians, went to the wharf where the ship was docked. Casks of tea were opened and the tea dumped overboard. Tea washed up on the shores around Boston for weeks afterwards. It caused a large financial loss to the British Company. The King responded by sending troops to put down the protests and to crack down on the colonists. In return the colonies formed their own militias and confrontations occurred. There was increasing public support of independence. The tea tax issue resulted in the phrase  "No taxation without representation" which  became the battle cry of the colonies in rebellion to the King.

Patrick Henry was an American attorney, politician, founding father and orator. It is best known for the speech he gave as a delegate at the second Virginia convention in 1775 known as the "Give Me Liberty or Give me Death" speech. It lead to the decision to send the King a declaration of independence. Here is what he said:

"They tell us, sir, that we are weak; unable to cope with so formidable an adversary. But when shall we be stronger? Will it be the next week, or the next year? Will it be when we are totally disarmed, and when a British guard shall be stationed in every house? Shall we gather strength by irresolution and inaction? Shall we acquire the means of effectual resistance by lying supinely on our backs and hugging the delusive phantom of hope, until our enemies shall have bound us hand and foot?

Sir, we are not weak if we make a proper use of those means which the God of nature hath placed in our power. The millions of people, armed in the holy cause of liberty, and in such a country as that which we possess, are invincible by any force which our enemy can send against us. Besides, sir, we shall not fight our battles alone. There is a just God who presides over the destinies of nations, and who will raise up friends to fight our battles for us.

The battle, sir, is not to the strong alone; it is to the vigilant, the active, the brave. Besides, sir, we have no election. If we were base enough to desire it, it is now too late to retire from the contest. There is no retreat but in submission and slavery! Our chains are forged! Their clanking may be heard on the plains of Boston! The war is inevitable–and let it come! I repeat it, sir, let it come. It is in vain, sir, to extenuate the matter. Gentlemen may cry, Peace, Peace– but there is no peace. The war is actually begun! The next gale that sweeps from the north will bring to our ears the clash of resounding arms! Our brethren are already in the field! Why stand we here idle? What is it that gentlemen wish? What would they have? Is life so dear, or peace so sweet, as to be purchased at the price of chains and slavery? Forbid it, Almighty God! I know not what course others may take; but as for me, give me liberty or give me death!"

The speech carried the day and the convention adopted his amendments.

Hamilton was a founding Father of the U.S. and was an influential interpreter and promoter of the U.S. Constitution. He was the first Secretary of the Treasury. He promoted a strong central government in conflict with Thomas Jefferson who supported power in the people. During his career he publicly attacked the character of Aaron Burr who served as the third vice president of the United States during President Thomas Jefferson's first term.  Burr challenged Hamilton to a duel and mortally wounded him. Burr was indicted for Hamilton's murder in New York and New Jersey, causing him to flee to Georgia. Both indictments quietly died and Burr was not prosecuted.

Jefferson was an American statesman, diplomat, lawyer, architect, philosopher and a founding father. He served as the third president of the United States from 1801 to 1809. He had previously served as the second vice president of the United States between 1797 and 1801. He was the chief author of the Declaration of Independence. Jefferson was a proponent of democracy and individual rights and argued for a break from the Great Britain as a new nation. Jefferson lived in a planter economy largely dependent upon slavery, and as a wealthy landholder, used slave labor for his household, plantation, and workshops. Over his lifetime he owned about 600 slaves. Claims that Jefferson fathered a slave, Sally Hemings's children, have been debated since 1802. He died with debts of $107,000, which is roughly $2 million today. Jefferson is an unusual case in that the debt wasn't entirely due to business failures or  investments. He had  a significant amount of debt from his father-in-law.

Jefferson and John Adams had a lifelong relationship with each other. In Adams bid for reelection he lost to Thomas Jefferson. Adams retired to his farm in Massachusetts. The two did not speak for nearly 12 years. Abigail, Adam's wife, without her husband's knowledge, wrote to Jefferson to express her condolences on the death of Jefferson's daughter. That initiated a brief correspondence between Jefferson and Abigail which ended with political differences. 12 years later, encouraged by a mutual friend, Adams sent a brief note to Jefferson which resulted in his reply. The two men revived their friendship by mail. The correspondence lasted the rest of their lives, some 14 years consisting of 158 letters between the two.

Adams graduated from Harvard College in 1755. He then taught school for several years and studied law with an attorney in Worcester, Massachusetts. Adams began his law career in 1758 and eventually became one of Boston’s most prominent attorneys. He married Abigail Smith, a minister’s daughter,. He and his wife generated a family of politicians, diplomats, and historians.They had six children, four of whom survived into adulthood. All of the boys became attorneys. Abigail Adams died in 1818 but John Adams lived long enough to see his son John Quincy Adams (1767-1848) become America’s sixth president in 1824.

Adams was the second President of the U.S. from 1797 to 1801. He was a leader of the American Revolution that achieved independence from Great Britain. He served as the first vice president of the U.S. Adams was elected to two terms as vice president under President George Washington and was elected as the United States' second president in 1776. In his bid for reelection, opposition from Federalists led to Adams's loss to Thomas Jefferson. He retired to Massachusetts where he farmed.

In 1826 Jefferson and Adams were the last survivors of the Declaration of Independence. The extraordinary fact is both died on the same day, which was Independence Day July 4, 1826 and within hours of each other. When Adams died, his last words referred to his longtime friend and rival when he uttered: "Thomas Jefferson survives", unaware that Jefferson had died several hours before.

The Boston Massacre was a confrontation between Boston citizens and British troops on March 5, 1770. British soldiers shot and killed several people while being harassed by a mob in Boston. The event was heavily publicized by leading patriots such as Paul Revere and Samuel Adams. British troops had been stationed in the area since 1768 in order to support crown-appointed officials and to enforce unpopular Parliamentary legislation. 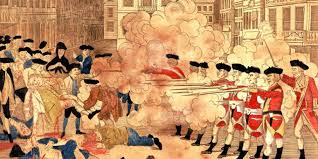 At the time, a mob formed around a British sentry and verbally abused him. He was eventually supported by seven additional soldiers, led by Captain Thomas Preston. The troops were hit by clubs, stones, and snowballs. Eventually, one soldier fired, prompting the others to fire without an order by Preston. The gunfire instantly killed three people and wounded eight others, two of whom later died of their wounds. Eight British soldiers and Captain Preston were arrested and charged with murder. No Boston attorney would agree to defend the unpopular British troops except Adams who believed everyone was entitled to be defended. Adams argued to the jury the soldiers had the legal right to fight back against the mob. To avoid a murder conviction that would result in hanging he also argued that if they were provoked they were at most guilty of manslaughter.

The jury agreed with Adams' arguments and acquitted Captain Preston and six of the soldiers after 2½ hours of deliberation. Two of the soldiers were found guilty of manslaughter because there was overwhelming evidence that they had fired directly into the crowd. The jury's decisions suggest that they believed that the soldiers had felt threatened by the crowd but should have delayed firing. The convicted soldiers were granted reduced sentences which reduced their punishment from a death sentence to branding of the thumb in open court.