There is a virtual unlimited supply of nonsensical claims and arguments that have been made by president Trump, but two of the recent are truly noteworthy for being logically inconsistent and just plain absurd.

One involves his recent attacks on mail in voting as fraught with the risk of fraud and manipulation.  His claim in a tweet, in capitals for emphasis, was: ""MAIL-IN VOTING WILL LEAD TO MASSIVE FRAUD AND ABUSE." He further claimed: "IT WILL ALSO LEAD TO THE END OF OUR GREAT REPUBLICAN PARTY." 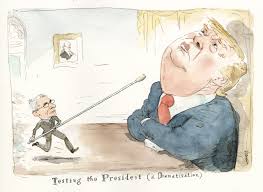 Mail-in ballots, he said, referring to conspiracy theories, could be stolen from carriers, counterfeited or forged by either forces inside the United States or by “foreign powers who don’t want to see Trump win.” It was recently reported  “There is tremendous evidence of fraud whenever you have mail-in ballots,” Mr. Trump claimed during an appearance in Arizona, a statement that has no basis in the experience of the states that give voters the option of voting by mail.

However, both mail in votes and absentee ballots are mailed in. They are processed in the same way. There is no distinction between them and  Trump's own lawyers acknowledged that there is no difference between "mail-in voting" and "absentee voting" last month in a lawsuit involving Pennsylvania's mail in voting rules.They acknowledged they are the same. Trump and White House press secretary Kayleigh McEnany have claimed that they voted "absentee" in Florida. But, there is no "absentee" voting in Florida. Instead, the state has a "no excuse" vote-by-mail system that allows anyone to cast a ballot by mail for any reason. They vote by "mail in" voting. His attack on mail in voting while recommending "absentee voting" makes no sense as they are processed in the same way. On top of that, there is no evidence of voter fraud involving mail in ballots anywhere in the country.

Another totally mystifying argument president Trump has been repeatedly making involves testing and the reported number of Covid 19 cases. He has continuously said if we didn't test the number of reported cases would be less. "Think of this, if we didn’t do testing, instead of testing over 40 million people, if we did half the testing we would have half the cases,” Trump said at a press conference at the White House. “If we did another, you cut that in half, we would have, yet again, half of that. But the headlines are always testing.” He says he has argued for less tests being administered because: “When you test, you have a case,” Trump said. “When you test, you find something is wrong with people. If we didn’t do any testing, we would have very few cases.”

Think about the total lack of logic of this argument. It is: If you do less tests you will have less reports of the virus. Less virus is needed to get back to normal. So less knowledge about the true facts is an improvement. It's like saying we have too many reports of mass shootings around the country. That is not good for America. If we didn't report them in the news, there would be less shootings to report. It's a nonsensical argument that ignorance of facts changes the facts.  It's like arguing the disease of Ebola is infecting and killing people in Africa on an increasing scale.We want less Ebola in the world.  If we stop testing for Ebola there will be fewer reports of the disease. As if hiding the truth somehow improves the situation. This is illogical nonsense. Concealing the facts does not change the reality it only produces ignorance about it. In the case of the virus, it also creates a dangerous situation where public leaders have no clue as to the extent of the problem and therefore can't deal with it properly. How could the president of the United States promote dealing with a pandemic which has infected and killed so many people make such a absurd, illogical and dangerous argument?