What did you think about last night's second and last presidential, so-called, debate? Here is my reaction to what I saw on television last night. You should know that it comes from someone who has already voted for Joe Biden, but here's what I thought.

I don't think it made any difference as far as influencing the great majority of voters. I can't imagine anyone, who after all of this time, hasn't already long ago made up their mind. Anyone who is still waiting to decide who to vote for 12 days before the election is a rare and peculiar voter. In addition, the great majority of people have already voted either by absentee or at the polls. It comes too late in the election cycle to have made any difference. At most it will have only confirmed how people already feel about who they already voted for.

Unlike how my my wife viewed it and how most of the reports I see in the media, my view was that Donald Trump did a better job of communicating what he wanted to say. He maintained control this time. He effectively made focused attacks on Biden, he repeated his talking points, he used misrepresentations as well as 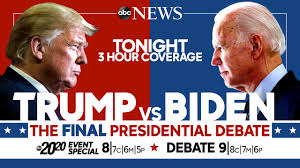 outright lies about his claimed accomplishments. He brushed off his incompetence with the same dishonest devices. I think he dominated the event in spite of the moderator. I think that if the time were to be added up it would show that Trump had more time than Biden through aggressive tactics.  My impression was that former VP Biden failed to effectively rebut the attacks made on him and his family. He failed to strongly make counterattacks on Trump. It seemed to me that Biden focused too much on his "plans" and "policies" rather than on Trump's failures, the pandemic and the state of the country. Biden demonstrated to me a lack of energy and strength, especially in light of Trump's demeanor. On an impression basis, irrespective of the true facts, Trump was more effective than Biden.

Most media commentators have expressed the view that the debate moderator, NBC news commentator Kristin Welker, did a good job and largely succeeded in preventing Trump from speaking out of turn. That was not my impression. While Trump clearly was far more disciplined this time than on the previous location, he was able to take control from her after the microphone controlled two minute talk. While two minute talks were controlled by the ability to turn the microphone off, it was not used in the comments following it. Trump learned he could get away with ignoring the time limit she gave for comment and just keep talking. When she tried to interrupt him. he just ignored it and continued talking. Her reaction was to give up and let him go. He quickly learned that he could get away with it and he did. It was very revealing that after much criticism by Trump before the event about her biased connections to Biden, during the event Trump volunteered how pleased he was by the way she was conducting it. Which means he thought he was wining that time battle. He was able to continue to repeat false attacks as well as repeat his talking points in spite of the moderator. The solution easily could have been a microphone control throughout all of the debate including the comments where this abuse occurred. The solution also could involve a strong moderator who would refuse to be intimidated and would challenge Trump's failure to abide by the time allotment. A strong mediator could be critical of  his abuse of time each time he did it. I think this moderator was greatly benefited by Trump's decision to moderate his conduct this time.

I have already given you my impression of Trump's performance. He came across to me as a tough Street fighter who hits below the belt and has no rules for the fight except to win. He seemed to me to have successfully repeated his talking points. He continuously made personal attacks on Biden. With the skill of a experienced con artist he made exaggerated claims about his supposed successes as president as well as important issues like the pandemic. In fact, he began by falsely claiming a vaccine for COVID-19 was imminent, followed up by continuing to lie about his refusal to release his tax returns, then raised a series of already debunked nonsensical allegations about Biden and his son. On the other hand, he was largely restrained in his demeanor and conduct compared to the last event. He managed to control as well as dominate by aggressive conduct. His supporters will applaud his performance, but the Biden supporters will see his performance as an exhibit of all of his flaws.

Joe Biden is 77 years old. People of that age and my age have what we call "good days and bad days." This was one of Biden's bad days in the sense of energy, mental alertness and appearance of physical strength. My impression was he was tired and low energy. He looked tired to me and seemed to have difficulty articulating what he was searching for to say. On occasion he looked befuddled. He looked like he was not up to the job of being president. There were flashes of significant exceptions to this however. They just did not occur as often as they should have in the face of the concerted attacks and falsehoods by Trump. There was in my view a notable failure to have short powerful talking points about Trump's failures and Biden's ability to fix what has been broken by Trump. I had the impression that he was a long time politician who is accustomed to more polite civil political exchanges.

My greatest criticism was his lack of skill in exposing the falsity of Trump's personal attacks on him as well as exposing the numerous misrepresentations and outright lies. Even more important, was his failure to repetitively concentrate on all of the serious failures and incompetence of Trump's administration. The more obvious  involve his handling of the pandemic and his incompetence in managing his administration. They include Trump's attack on the Department of Justice, the FBI, the CDC and his methodical destruction of important regulatory bodies. I felt Biden did a poor job pointing this out and instead talking about his plans if elected. No one cares about political plans at this point. It's not a battle of political plans, but of impression of candidates. Given the magnitude of his exaggerations and misrepresentations this could have been done dramatically. A classic example was  Trump's outrageous claim: “Nobody has done more for the black community than Donald Trump,” Trump claimed. “If you look, with the exception of Abraham Lincoln — possible exception, but the exception of Abraham Lincoln — no one has done what I’ve done.”  Given this man's history of racism, suggesting only Abraham Lincoln "possibly" might be equal to Donald Trump on the issue is an invitation for sustained mockery by Biden which was missed.

How to Improve These Candidate Meetings

In my view, there has been a serious failure by the Commission on Presidential Debates to provide voters a meaningful discussion involving presidential candidates. Certainly they are not debates. A debate is generally where two people have a discussion back and forth about the pros and cons involving an issue. Why treat or call them a debate when they are a chance for voters to evaluate candidates. I think the timing of events like this is important. They should be scheduled early in the campaign before the time of the election. Holding one 11 days before the election provides entertainment value but is not helpful for voting decisions. The Commission has failed to institute available tools to control candidates who verbally agreed to the rules and then violate them at the time of event. The best example of this is  the last so-called debate and Donald Trump's conduct which the moderator was totally unable to deal with. The time limits should be enforceable by microphone control and sanctions of loss of time at a minimum. The Commission should exercised more skill in selecting qualified moderators. They should not be subject to claims of bias. In the last debate the moderator was a fox news commentator, a network totally identified with Trump. This time it was a woman who has had close and financial connections to Biden. The commission should select people who have the skills to conduct and control the event. The moderators should not be given the discretion of deciding the questions or discussion subjects. That should be done by a group of qualified persons who will have the most informative subjects.

A lot more thought should go into these events in the future.