There is a tent city encampment that stretches along the entire block of third Avenue between Pike and Union streets located in the heart of downtown Seattle. “The jungle” is a greenbelt on the western 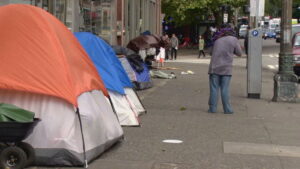 slope of Beacon Hill in Seattle that is known for its homeless tents and encampments as well as for the crime that occurs there. The jungle consists of more than 160 acres along an elevated section of Interstate 5 between South Dearborn Street and South  Lucile St in Seattle. Recently, As a result of numerous incidents of people throwing debris into traffic along freeways, Seattle city and state agencies decided to remove two large homeless camps along I -90 where the majority of the debris throwing incidences happened. Tents and one room wooden homes are frequently seen when driving in and out of Downtown Seattle on I -5 and I – 90. They are on hillsides, along off ramps and many more are unseen located underneath the highway in areas previously fenced off. The camps and the trash accompanying them is growing unchecked.  The state highways are looking like drive through trash heaps. Tent cities exist along our freeways into Seattle, in the parks and on the sidewalks of the city.

But it will not be going away anytime soon. The Washington State Department of Transportation has as its chief responsibility building and maintaining the state highways. It is also their job to

provide a cleanup crew to pick up trash along the highways from the camps. However, the pandemic has shut down to the states litter programs: Adopt a Highway program and Ecology Youth Crews. In the meantime, roadsides across the state are littered with a variety of discarded items as a result of  suspending the clean up due to the COVID problem. Anywhere you travel to Seattle you can see trash and litter along the roadside and in green areas. Homeless encampments generate enormous quantities of garbage. The city’s response for four months of the year was to have municipal crews cleanup eight of the sites rather than remove illegal encampments. In fact the city Council has enabled the situation to continue by launching a pilot program to offer weekly garbage pickup services to ten of the more than 400 illegal encampments. That program has been a failure while thousands of tons of garbage, needles, tents and feces the blanket much of the city. Homeless encampments with occupants with opioid addiction and mental illness exist in almost every corner of Seattle. 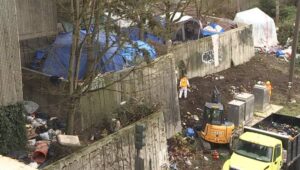 For visitors to Seattle it is difficult to travel inside the city without seeing graffiti everywhere as well aa on buildings and storefronts.. A building that’s not being used and boarded up will be quickly hit with graffiti. City Hall has curtailed enforcement of graffiti and removal of it because of COVID – 19. The city suspended its nuisance code enforcement regarding spray painting and graffiti in Seattle as a result. The downtown Seattle Association says the number of graffiti instances has risen over the past year, not only in downtown, but throughout the city. Seattle business owners report that not only has the Seattle graffiti, homeless tents and litter got worse but crime has also gotten worse in downtown Seattle. Business owners and neighbors are frustrated beyond the breaking point.

Many downtown storefronts are empty and many employees remain working at home and with few pedestrians or shoppers making it is relatively unsafe to be in downtown areas of Seattle. The King County Courthouse has been in the news because of the crime, loitering, panhandling and harassment outside the courthouse. King County judges have repeatedly complained to the city about the lack of safety of people working at the courthouse, jurors and judges. The Seattle Police department reports that officers responded to 550 assault or threat reports at that location. A large homeless tent city in the park next to the courthouse was recently removed and fenced off in an effort to end the situation. Downtown crime is increasing at an alarming rate: City of Seattle crime data for downtown Seattle indicate a jump in “person crimes” (aggravated assault, robbery, rape 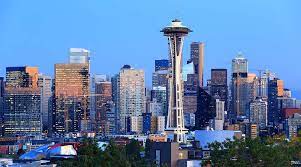 The city council and mayor have had months to deal with this situation. They have had millions of dollars available and spent on these problems. In fact, Seattle’s sales tax is 8.8% except for restaurants and bars where it is 9.3% used to pay for the construction of the baseball stadium.  The efforts have been a significant failure. Seattle looks like a third world city. We can only hope that the election in Seattle will result in significant improvement to restore this beautiful city.