Associated Press writers Nooman Merchant, Lorne Cook and James LaPorta have written a revealing report about the loss of the war in Afghanistan. They write that in the last 20 years some $2 Trillion dollars of American taxpayer money has been spent in that country with a loss of 2448 American military deaths.  About $83 billion Dollars was spent on the Afghan forces in sustaining its 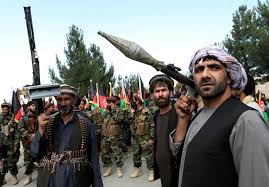 army and police. That’s in addition to the $145 billion spent by the US government trying to rebuild Afghanistan. In addition another $837 billion was spent by the United States  beginning with an invasion in 2001. The $83 billion spent on Afghan forces over 20 years is double last year’s budget for the entire US Marine Corps. It is more than what was budgeted last year for food stamp assistance for about 40 million American citizens.  It turns out that the Afghan forces were so completely dependent upon American assistance that the Pentagon even paid the Afghan troops salaries. However, the fact is, too often that money along with unknown amounts of fuel and other supplies were siphoned off by corrupt officers and government officials.

When it was up to the Afghan forces to defend the country, it took only two weeks for them to collapse so quickly and totally that the Taliban not only got total victory,  but the enormous amounts of American military equipment we provided Afghanistan. In some cases the Taliban defeated the Afghans without a shot even being fired when troops in mass surrendered. They acquired American paid for helicopters, ammunition, weapons and firepower. The Afghan failure to defend their own country allowed  the Taliban to acquire an enormous amount of modern military equipment while taking control of vast areas. The equipment surrendered to them included combat aircraft and entire military bases. Most Afghan forces chose to surrender vehicles and weapons rather than fight. This in spite of the fact that the Taliban forces had smaller numbers, less sophisticated weapons and no airpower.  Despite 300,000 Afghan troops to the Taliban 80,000 the majority of  Afghan simply gave up without a fight.

What is particularly disturbing is that United States made the same strategic mistake about withdrawal after wars twice before, in Vietnam and Iraq.  The withdrawals there were a similar disaster to this withdrawal.  It is true President Trump had already made a deal with the Taliban that specified U.S. troops had to leave by May 1. However, it was clear a responsible withdrawal needed more time and better preparation than was given to this one. President Biden ordered the pullout of troops  before obvious appropriate preparation for evacuation of Afghan and American personal who should have been evacuated. Reasonable preparation was required for the withdrawal and there was time to have done so.  Instead, the process was delayed until it was necessary for a hasty withdrawal of the military  and at a time  just as the Taliban offensive was moving into its major phase of military action.

The Taliban say they will rule Afghanistan according to Sharia Islamic law. What does that mean? To begin with, Islam is the world’s second largest religion and Muslims make up a majority of the population in 47 countries. It is the fastest growing major religion in the world. It’s been predicted that if the current demographic trends continue the number of Muslims will exceed the number of Christians by the end of the century. The Muslim religion is generally divided into two denominations: Sunni (85 – 90%) and Shia (10 – 15%). The Sunni – Shiite divide is nearly 1400 years old dating back to a dispute of leadership following the death of the prophet Mohammed in 632. In fact Sunnis do not consider Shiites to even be Muslims. Sharia is Islam’s legal system derived from the Koran and the sayings of the Prophet Mohammed. The interpretation of the Sharia by the Taliban adopts harsh rules of conduct and punishments. It also applies significant restrictions on women and girls. We can expect oppressive rule by the Taliban over the people of Afghanistan.

We became involved in Afghanistan  after the September 11th terrorist attack on the trade towers  in New York to end sanctuary to Al Quaeda.  We had as many as 140,000 troops there at one time. We have spent twenty years there through the administration of four presidents – two Republican and two Democrat. We have spent $2 Trillion dollars and American lives there. President Biden is the first president with courage to do something to end our involvement.  The terrorist fighting with the crime, incompetence and corruption of the country made the goal of peace while instituting American democracy and stable government  next to impossible. The New York Times reports that over the twenty years  the corruption of the Afghan police and government was so rampant  many Afghans questioned whether their government or the Taliban were the greater evil. Add to that Islamic religious extremism and the chances of a successful outcome are remote at best. I admire President Biden’s courage in making this politically controversial decision, but I  also agree with the editorial in the New York Times “The war needed to end, but the Biden administration could and should have taken more care to protect those who risked everything in pursuit of a different future.”

One thought on “THE TRAGEDY OF AFGHANISTAN”