November is a time the Catholic Church remembers the dead with a celebration on November 1st and November 2nd. It’s a fitting to remember good people who are no longer with us. Here are a few of these special people who died during this period and who played a role in my life. 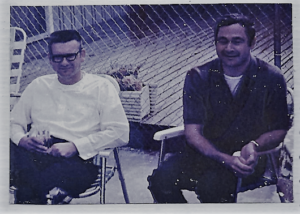 The reverend Michael J. Schmitt was born in 1929 in Port Angeles. He died at age 58 on November 10, 1987 in Auburn, Washington in an auto collision when a driver was using his cell phone struck his car head on.  We became friends while we were both attending St Martin’s College (now University) in 1954. He was taking pre seminary courses for entry in the Catholic seminary. I was exploring whether I should follow a similar path. Mike  entered the seminary and became a priest. I entered law school at Gonzaga and became a lawyer. We stayed in touch and he became assistant pastor at the Catholic church in Mount Vernon I attended. We remained friends until his death.  He was a kind man, with a quick sense of humor and was someone everyone liked to be around. I am honored to have been his friend. See my previous post about him https://paulluverajournalonline.com/weblog/2011/11/michael-schmidt.htm

Photo of Fr. Thomas Vandenberg on the left and Fr. Michael Schmitt on the right)

Dr. Joseph Voegtlin was born in Seattle in 1926. He died on November 5, 2011. Joe was my long time friend and our family physician until his retirement in 1992.  Joe had a gift for diagnosing problems and was a gifted surgeon as well. With his large patient load he was often my witness in a number of  jury trials. He was also a great teacher and served as an expert witness for me in trial as well. We jointly put on seminars for lawyers as well. He was a good friend. See previous notes about him https://paulluverajournalonline.com/weblog/2011/11/dr-joseph-voegtlin-md-1926-2011.html

Walter J. Deierlein, Jr. best known as Jack, was born on the 4th of July in 1918 in Big Lake, Washington. He died October 22, 2010 in Mount Vernon. He was brought up in Sedro Woolley where he attended school and during the summers worked in the logging camps and shingle mills. Following graduation, Jack attended the University of Washington in pre-law studies. He spent summers

working as a seaman on passenger freighter ships of the Alaska Steamship Company before the Alaska Highway or airplane traffic made visiting Alaska common. His Academic courses were interrupted by orders to active duty in the Army following his pre-law degree and BA (1941). Jack was ordered to England and sent to D-Day staging area on the English Channel. During the European Campaign he rose to the rank of Lieutenant Colonel. He was awarded the Bronze Star Medal for his service in France. After the end of war, married Micki on June 18, 1946, in Galax, Virginia, at her hometown church. They had a daughter Sarah. Returning to Law School, he received his Law Degree at the University of Washington and began private practice in Mount Vernon. He was elected Prosecuting Attorney for Skagit and Island Counties and served two four-year terms. In 1959 Jack hired me to become a Skagit County deputy prosecutor with Harry Follman the other deputy prosecutor. Jack was my legal mentor who taught me how to try lawsuits and practice law. Jack became president of the Washington State Association of Prosecuting Attorneys. Deierlein was appointed Superior Court Judge of Skagit and Island Counties by then-Governor Daniel Evans. During that time Jack was elected president of the State Association of Superior Court Judges, and served locally with Judge Harry E. Follman.

became friends while we were attending night law school at Gonzaga University. After graduation John practiced in Everett for many years. In 1978 John was appointed to the Snohomish County Superior Court by Governor Dixie Lee Ray. He severed with fairness and retired from the bench. John  was a man of life-long faith and a devout Roman Catholic. He was active in the Seattle Archdiocese cannon law administration. He was a personal inspiration to me. He was a great friend and a kind man. It was a privilege to know John.