On January 24, 2002 William “Bill” Taylor died in Anacortes. He was one of Anacortes’s most successful basketball coaches. He also was a positive influence in so many young men’s lives, including mine. He was a great coach and mentor to me. I’ve published a full account of my high school relationship to this great coach and his profound influence in my life: https://paulluverajournalonline.com/weblog/2013/01/william-taylor.html . In addition, I published a background of this unique man who was so important in guiding my life. https://paulluverajournalonline.com/weblog/2014/01/bill-taylor-anacortes-high-school-basketball-coach.html

William H. Taylor was b 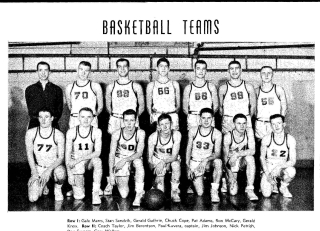 Basketball really took over in Anacortes when Richard “Boots” Wooten arrived. He had coached winning teams at Walla Walla, Sequim, Mt Rainier and Anacortes. He started the tradition of basketball madness in Anacortes. With Boots as the coach basketball became a town obsession by producing winning teams that went to State Tournaments. The town became basketball enthusiastic very much like the one portrayed in the movie Hoosiers about a high school team in Indiana and the town’s devotion to basketball. In fact, our small gym filled to overflowing with spectators standing along the out of bounds line. The town emptied when the team played away and there was a parade of cars following the team bus to the out of town games. The town lived basketball. Bill Taylor became the new coach after Boots left. He had big shoes to fill and carried on the tradition of winning teams. As portrayed in the movie Bill had fans tried to tell him how to coach and, as in the movie, he had to close practice to their watching. But, he was a great coach.

His high school teams won 212 games and lost only 56 during his coaching from 1946 to 1960. Taylor’s teams went to the state tournaments. Two years in a row his teams made appearances at the Washington State Basketball tournament and both were against Lincoln of Seattle. The second year both teams were undefeated and the game was watched by the largest crowd in the history of Heck Edmundson Pavilion with 3,000 people shut out wanting to get inside. Anacortes lost both years to Lincoln, but the Anacortes fans turned out in force to welcome them home anyway. His record of winning was so good he was named to the High School Basketball Hall of Fame. He also was an outstanding baseball coach at Anacortes. He had been a great baseball player at the University of Washington He also was the moderator of the Anacortes high school Key Club. Bill taught the students honesty, civility and character and set the example by his personal conduct.

When I graduated from high school he wrote this in my annual:

“Paul, as been a wonderful experience watching you go up the ladder boy! I don’t think it facetious in my saying, “that you, without a doubt, have been the best student leader that I have seen at AHS”!! My only regret was the fact that you did not receive a faculty award, but don’t shed any tears over this. After all, we all can’t all be students? If it is any consolation to you, I believe that you were the outstanding all around senior four 1952 – 1953 girls included. Don’t look back son, look ahead. Good luck and success. Glad to have had you aboard, Bill Taylor”

My life story involves a number of very significant encounters with different men and women who had a important role in my life. They include my 3rd grade teacher Mrs. Marshall who used to reassure my parents that in spite of my many with many disciplinary problems I would be fine, the pastor at the U of W Neman club. Fr. William Dooley who inspired my spiritual growth and my relationship with attorney Gerry Spence who promoted growth of professional trial skills, along with others equally important. However, it was Bill Taylor who influenced my life at a critical turning point from the path I was on to one a new one of solid values and determination to succeed.

This is in honor of William H. Taylor, great coach, mentor to me and many other young men and a man of great character. I  will always owe a debt to Bill for his positive influence on my life at a critical turning point in my life.