The Republican National Committee  has voted to censure Representatives Liz Cheney and Adam Kinzinger for participating in the the House of Representatives inquiry into the January 6th deadly riot at the Capitol. The resolution states that both lawmakers “have demonstrated, with actions and words, that they support Democrat efforts to destroy President Trump more than they support winning back a Republican majority in 2022.” On top of that it goes on to accuse them of “participating in a Democrat-led persecution of ordinary citizens engaged in legitimate political discourse.” 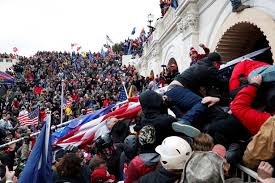 The measure was adopted Friday at the RNC’s annual meeting in Salt Lake City, which brought together the party’s 168 members for their general session. Cheney and Kinzinger are the only Republicans on the January 6 committee. Originally, the House Homeland Security Committee hoped to create a fully bipartisan committee, but this plan was derailed by Minority Leader Kevin McCarthy. The move to censure Cheney and Kinzinger, of Illinois, is unprecedented, and marks the first time the national party has rebuked an incumbent congressional Republican — much less two — with a formal censure backed by its members. The resolution came days after Mr. Trump suggested that, if re-elected in 2024  he was open to considering pardons for those convicted and those involved in the Jan. 6 attack. At the same time he again insisted Vice President Mike Pence “could have overturned the election.” Mr. Pence responded in a speech saying “President Trump is wrong.” The resolution is a continuing effort by the Republican Party to minimize the January attack on the Capital as well as the effort to invalidate the results of the 2020 election. Commentators, including some Republicans, have criticized the resolution as making the the riot and actions acceptable political actions. However, most House Republicans  just tried to ignore it by refusing to answer questions or saying they had not read the censure resolution. However, Republican Mick Romney said of the language in the Resolution:

“Shame falls on a party that would censure persons of conscience, who seek truth in the face of vitriol. Honor attaches to Liz Cheney and Adam Kinzinger for seeking truth even when doing so comes at great personal cost.”

Cheney and Kinzinger’s censure, ultimately, is indicative of how much the Republican Party continues to value allegiance to Trump, sending a signal to candidates and voters ahead of the midterms. However, it is difficult to imagine that any legitimate political party would describe an unprecedented attack on the Capital of this magnitude as “legitimate political discourse.” A bipartisan Senate report found that at least seven people had lost their lives in connection with the Jan. 6 attack. At least 81 Capitol Police officers were assaulted during the siege of the Capitol, according to filings by federal prosecutors. About 65 D.C. police officers also suffered injuries on Jan. 6, including several concussions from head blows from various objects, including metal poles ripped from inauguration-related scaffolding and even a pole with an American flag attached according to D.C. police officials.

Speaker McCarthy’s Republican boycotting of the Committee doing the investigation is impossible to condone given the refusal to participate is clearly a selfish political act and against the best interests of America. The rioters should be prosecuted and Congress investigate the causes to ensure it never happens again.  The Resolution language only adds to the outrageous hypocrisy of Republican leadership about this assault on our democracy.