Susan Schell of the Peninsula Gateway has written a front page article about purse seine fishing and Gig Harbor. Her article Fishing for Harbor Heritage is well written. The photo below is of John Stanich who owned the fishing boat Welcome and who lived in Gig Harbor. Below that is a smaller shot of the Welcome on her way to the fishing grounds in Alaska 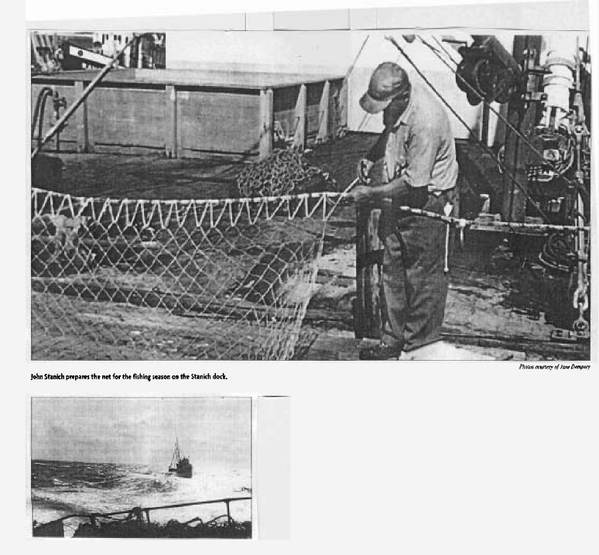 The article and photos had particular significance to me because I fished on the crew of the Welcome with John Stanich in 1954 just after graduating from high school. We had a great year catching Sockeye at the Salmon Banks fishing grounds off San Juan Island. I bought a car and had enough money to pay for the entire year of college plus savings. I had fished in high school and even after starting college. We would leave for Alaska in late May. It was before there were any restrictions so you could fish where you wanted. I’ve fished the Bering Sea, Kodiak and Southeast Alaska on purse seine boats. After fishing Alaska we would come down to Puget Sound and fish the San Juan Islands. When Fall fishing would start in September, I’d head back to school.

It was a great life and a great maturing experience for me. The crews were from seven to nine men and most were grown ups. Many were from Croatia with little formal education and spoke broken English. You lived in tight quarters and learned to work hard as well as get along with others.

The net we used was made up of an upper line with corks to make it float and a lower line with weights to hold it down with the net tied between the two lines. There were rings along the line on the bottom of the net with a line that ran through the the rings so that by pulling in both ends of the line through the rings, the net bottom would be closed or pursed up trapping the salmon inside.

In addition to the 50 foot purse seine boat, there was a smaller inboard boat known as the “skiff.”  I always worked in the skiff, which I preferred. Two men would sit in the skiff pulled tight to the stern of the boat and towed along behind. One end of the net on the stern was tied to the Skiff. When the skipper saw a “jumper” (salmon jumping out of the water) or determined it was time to set the net he’d yell “let er’ go” and the deck crew would pull a pin that connected the skiff to the big boat. The  skiff would be left as the big boat picked up speed pulling away. The weight of skiff would pull the net piled on the stern of the big boat off into the water.

The skipper would make a large U out of the seine with the big boat on one end and the skiff on the other. Both boats would be under power pulling at the same position with the net behind. Any approaching salmon would swim into the net. After keeping the net open for whatever period the skipper thought right he would signal to close the net  by bringing the two ends together. Both boats would power towards the other, pulling each end of the net behind them.  When they were close enough the  line connecting the skiff to the net would be passed to the big boat and the net would be in a circle with both ends on the big boat. There was a powerful davit on the seine boat. The lines from each end of the net that went through the rings at the bottom of the net would be pulled in with the davit. That would close the bottom of the net trapping the salmon inside. As the rings were collected the excess net would be pulled by the crew and stacked on the stern to be ready for the next time. The corks and net had to be stacked in a particular way to facilitate the net being pulled off the stern without getting tangled.

When all of the rings had been pulled together and the bottom of the net pursed tight it was pulled against the side of the boat. The salmon would be collected in the net pulled tight. If there were not too many salmon, a strap would would be passed around the net and drawn tight with the salmon inside. The net, with salmon inside, would be lifted using a pulley from the mast and the davit and the salmon either deposited on the deck or poured into the hold of the ship.If there were too many salmon to lift, they would be lifted out of the pocket with a smaller net or “brail.” The brail also had rings around the bottom and after filling it with salmon, it would be suspended over the open hold, the line through the rings released and the salmon would pour out of the bottom into the hold.

Each night the catch would be unloaded from the purse seine boat to either the cannery or to another boat known as a “buyer” to be transported to the cannery. I have seen huge scows in Alaska loaded with hundreds of salmon. So many, the cannery couldn’t process them. I have stood up to my chest in the hold of the boat so full of salmon that the boat looked like it would sink. I have seen the corks of the net sink before the ends were even brought together with salmon going over the top because there were so many collected in the net. On more than one occassion, I have seen so many salmon in the net before it was even pursed up that the skipper called for other boats to pull along side our net and brail the fish into their boats. I have seen the bays and rivers of Alaska so packed with salmon you could walk across them. I have seen the fish traps of Alaska filled with salmon beyond count. Today we are talking about salmon becoming extinct.

When I was fishing you were paid by the fish, not the pound and each kind of fish had a different price. The crew received a share of the total earnings at the end of the season after the expenses for food, fuel etc was first deducted. The shares were not equal as different positions received different shares, with the skipper taking the most. If the boat was owned by the cannery it received a percentage as well.

When I started around 1950 the work was hard and was all done by hand. The net might be released six or seven or more times a day. Each release of the net, known as a “set,” meant repeating the hard work. You were up at day break or 3:30 am and got to bed when it was dark. You looked forward to Friday when fishing ended until Monday when it started again. Later, in my fishing career, someone invented a “power block” which pulled the net by power. The net would be put in the block, the block raised on the mast and the net pulled in under power with the crew arranging the net on the stern.

Before coming on board to help pull the net, the men in the skiff had to pull a smaller net (known as the “lead”) that was released from the skiff to lead the salmon into the big net. It was pulled by hand over revolving wooden rollers that were of little help. After pulling that net by hand, I would get on board the larger boat and begin pulling the cork line by hand to the boat to stack it them out of the way towards the bow of the boat. When the corks were pulled and stacked I would go to the stern and help the other crew pull the net in. All of this work was orignially done by hand without power. Everything about fishing was hard work, but it was a wonderful life on the sea. I learned how to repair rips in the net (“sewing”) and how to tie the net to the cork line (“hanging”) These were skills the men learned and some were better than others.

I still have the hand carved “needles” used for sewing and hanging a net. Carved by hand out of hard wood the needles had the repair line wound around a center piece. It was used to repair the tear in the net and to tie the net to the lines. I also have a wonderful wooden scale model of a purse seine boat. It is three feet long, has a movable table the net sits on, removable hatches and was a first prize winner at a contest. I have pictures hanging in our library of men pulling nets on the old seine boats as well as a picture of me in high school when I returned from the Alaska season with my attempt at a beard.

I owe much to purse seine fishing. My mother’s family (Babarovich) were fisherman and one of my mother’s uncles owned the first fishing boat in Washington that used power the Uncle John. This relative is also the one who is buried in the Anacortes cemetery under a stone that gives his name and says “known among men as honest John.” Our family grocery store, Luvera’s Market depended upon the business of the fishing fleet in Anacortes for it’s survival. Fishing paid a lot of my college education. It also taught me most of what I know about people, hard work and life.

One thought on “PURSE SEINE FISHING & THE MV WELCOME”