MSNBC reported on instruments and other devices left inside patients after surgery recently. The article discussed the number of cases where this has occurred and where the patient wasn't told. My law partner Ralph Brindley has handled a number of these cases, but one was particularly shocking. The doctors had left a long metal retractor inside the patient after a surgery in Seattle. The patient wasn't aware it had happened, but noted pain on bending and the fact he set off the security alarm at airports. When an X ray revealed  the presence of this large metal device left inside of him, he was shocked. Here's an actual X ray of the patient with the device inside of him. One wonders how doctors could forget to remove this device. 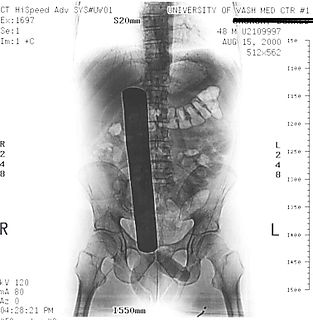