There has been a lot of publicity about the amazing swimmer Michael Phelps winning a record number of gold medals in the China Olympics. As part of the reporting, the name of Paavo Nurmi has been mentioned because he had a record number of medals in his day. Not many people today recognize Nurmi’s name or know about the "Flying Finn" and "The King of Runners." During the 1920's Nurmi, from Finland, was setting all kinds of running records and was a source of great pride to the newly independent country. He is considered one of the greatest runners of all time. During the 1920's he 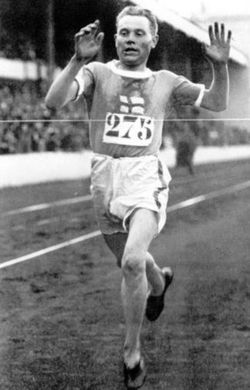 was the best middle and long distance runner in the world setting numerous records in a variety of track events.

Nurmi (1897 – 1973) set twenty world running records and won nine Olympic gold medals. His records lasted for years. Nurmi ended his Olympic career in the 1928 Summer Olympics. He was disqualified from the 1932 games by a controversial ruling that claimed he was reimbursed more than he should have been for expenses while on a running tour.

Since 1915 the only American to set a record for the mile was Jim Ryun. He set the record in 1966 and broke that record in 1967 with a run of three minutes fifty one seconds. Ryun was an outstanding runner. In 1964 he became the first high school runner to break the four minute mile. At Wichita High School East, in 1965, he established the high school and U.S. open mile record of three minutes fifty five seconds, a record that stood for thirty six years.

So, the lesson to be learned is that, like many artificial barriers in life, the four minute mile barrier was not physical. Once Bannister broke the record many runners ran the mile under four minutes. The only barrier was in the mind of the runners who thought it impossible.

0 thoughts on “PAAVO NURMI AND THE FOUR MINUTE MILE BARRIER”