In 1998 Gary Kinder published Ship of Gold in the Deep Blue Sea. It was a compelling story about the sinking of an actual ship. (http://www.shipofgoldinfo.com/) The story really began in California, in 1848, when Captain John Sutter was managing thousands of acres of land known as Sutter’s Fort. He was looking for a place for a lumber mill. A location was found and construction began The damming of the stream resulted in the

discovery of gold and the California gold rush followed.

On August 20, 1857 several hundred passengers in San Francisco boarded the SS Sonora for Panama City. Many of the passenges on board were California prospectors returning with their personal treasures of gold. In addition, the cargo contained many boxes of gold in coins, ingots, nuggets and other forms of gold. Several tons of gold.The gold was from California banks on route to the banks of New York.

The ship ran into a hurricane off Cape Fear with winds of some 100 mph and heavy surf which shredded her sails. About midday the boiler stopped functioning. A leak in one of the paddle wheels caused her to take on water and without the boiler the pumps couldn’t function nor could the paddles keep her pointed into the huge waves. A bucket brigade was formed and the passengers struggled to bail the vessel. An attempt to get the boiler working again during the eye of the storm failed and when the second half of the storm hit the water continued to rise in the ship. The ship had to be abandoned. 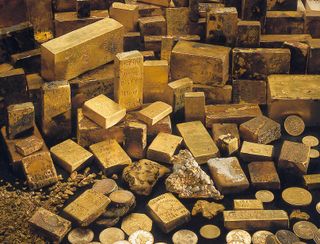 of their gold money belts on the deck only to end up dumping the money belts on the deck and abandoning them. Women and children were loaded into life boats. Some had to be lowered by rope to the life boats below. Some passengers jumped and had to be pulled from the sea into the boats. About one hundred forty eight passengers, including all the women and children aboard the vessel, were rescued from life rafts by another ship that was in the area. About 8:00 pm a large wave struck the crippled ship. Timbers broke and with some 400 hundred men hanging on in the bow of the ship, including  the captain, she dipped at a sharp angle and sunk below the surface.

Not only was the sinking of this vessel a tragic loss of life there was the matter of an estimated three tons of gold that also went down with the ship. The gold on board amounted to 20% of all of the gold held by Manhattan banks at the time of the sinking. The loss of this enormous amount of gold headed for Wall Street caused financial chaos and a run on gold reserves of New York banks. . The loss contributed to the Panic of 1857 in America. The loss of the vessel and passengers was also the worst maritime disaster in American history. It has been reported that the sinking of the SS Central America was in it’s century every bit as sensational as the sinking of the Titanic in a later century.

The location of the wreck has been a source of interest ever since the sinking. Salvage crews searched over the years without success. In 1997 the wreck was finally found in 8,000 feet of water off Cape Fear using a scientific search system with computer generated grids and an unmanned underwater vehicle. Recovery of the gold was also made by the same kind of unmanned device.

There was legal fighting over the salvaged gold when some forty insurance companies sued claiming the gold. he salvage company from California group ended up with 92% of it. The total value was estimated to be over $150 million. One gold ingot weighing 80 pounds was sold for $8 Million dollars (http://en.wikipedia.org/wiki/SS_Central_America)

The sinking of this ship is an interesting and tragic story about what life is really all about. Just like the wealthy passengers on the Titanic, not one of them would hesitate to willinging give up their gold and entire fortunes in exchange for their life. Our injured clients know that there is no price one would not pay to regain their health.