It’s reported this week that Pope Benedict XVI, flying on the papal airplane to Africa, told reporters that condoms were not the answer to Africa’s problem of HIV. He claimed that the Church was "in the forefront" of the battle against AIDS and that the Vatican’s answer to this problem was "sexual abstinence. The Vatican hasn’t budged from its position that the use of condoms is immoral since the1968 encyclical Humanae Vitae. As recently as 2003 a Vatican document Values versus safe sex rejected condoms in a HIV prevention program. 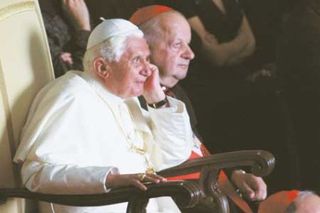 is birth control generally. In addition, it is argued that condoms are not 100% effective so there is a false  sense of security that encourages more sexual risk taking. Cardinal Alfonso Trujillo, head of the Pontifical Council for the Family maintains that the use of condoms actually increases AIDS because the virus is 450 times smaller then the sperm cell which increases the risk of it going through the latex.  Furthermore, it is argued, education about abstainence works. However, the preponderance of medical research demonstrates that condoms do, in fact, reduce the risk substantially. The sad reality is that the Cardinal’s claims are scientifically inaccurate and, more importantly, socially irresponsible. As to education about abstinence the American Psychological Association (www.apa.org) has reported:

"Based on over 15 years of research, the evidence shows that comprehensive sexuality education programs for youth that encourage abstinence, promote appropriate condom use, and teach sexual communication skills reduce HIV-risk behavior and also delay the onset of sexual intercourse."

Those who are actually involved with working with people suffering from HIV/AIDS question this proposed solution to the pandemic which ravages Africa. Commonweal Magazine (www.commonwealmagazine.org) published an article by Dr. Marcella Alasan, a physician in the Hiatt Global Health Residency in Boston which was republished in Catholic Online (http://www.catholic.org/international/international_story.php?id=19561&page=3). The article is an excellent discussion about this subject.

women have choices in these countries, but women are sometimes given in marriage at birth or sold in exchange for cattle. According to the UNICEF teenage brides in some African countries contract the disease from their husbands who tend be older and were infected before marrying. More then two thirds of the new HIV infections between people aged 15 to 25 occur among women. Obviously abstinence won’t protect these women. As Dr. Alasan points out: "How can the Vatican continue to prohibit the use of a life-saving intervention amid a pandemic of unprecedented proportions?"

In fact, many of the Catholic clergy and laity involved in actually helping people with AIDS endorse the use of condoms. They argue that preservation of life is paramount. The article says that Father Valeriano Paitoni working in Brazil argues that the AIDS is a world wide epidemic that must be confronted with scientific methods. He says that to reject condom use is to oppose the fight for life. Bishop Kevin Dowling of South Africa has implored the Vatican to view condom use as preventing death rather then the Vatican view of precluding new life. South Africa has 5.3 million people infected with HIV.

I like the way Arianna Huffington writes and thinks. I buy her books and read her blog the Huffington Report. She commented on this this week:http://www.metro.us/us/article/2009/03/18/00/3101-72/index.xml She said:

"No matter how overwhelming the evidence, there are always a few true believers who just won't admit they're wrong. To have Pope Benedict leading the flat-earth anti-condom chorus while flying to a place where 22 million people are infected with HIV boggles the mind."

The ban of birth control in 1968 by Pope Paul VI provoked a historical uproar which included Catholic theologians. Largely ignored by world wide Catholics the ban itself is of questionable moral validity in the eyes of many. It seems incomprehensible to me that a method of reducing the risk of a disease as horrible as AIDS should be deemed immoral in weighing birth control morality against the ravages of a disease like AIDS.