Seattle attorney Tom Frey’s dad died on Sunday September 13, 2009 at 99 years of age. Over the years I had heard Tom talk about his dad’s baseball career, but I never realized he played in the majors nor what a great player he was until I saw a picture of his dad, in a baseball uniform, published in the obituaries and begin to read about his career.

In 1933 he had moved up to Nashville of the Southern Association and then made his major league appearance with the Brooklyn Dodgers in August of that year played in 34 games with a batting average of .319. Frey was the starting shortstop for the Dodges over the next three seasons and then was traded 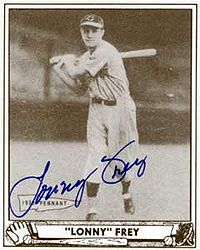 to the Cubs in 1937. A year later he was traded to Cincinnati where he became a regular hitting infielder. He was a National League all star in 1939, 1941 and 1943. He led the league in steals in 1940. For the first five years of his big league career, Lonny Frey was a switch-hitter. In 1938, he switched to batting only from the left side. He weighed only 130 lbs. Frey's mother named him Linus, after the Bishop of Rome.He apparently was called "Junior" going back to his days on the sandlots in St. Louis, because of his small size.

At thirty three Frey began military service in December of 1943. Frey played military ball in the service and was an all star selection in 1944 with a batting average of .450. He was discharged at age 35 and returned to Cincinnati playing in some 111 games with a batting average of .246. He was traded to the Cubs and then to the Yankees, but saw little action with the Yankees. In 1948 he signed with the Giants which was his last year in the major leagues. He finished his baseball career with the Seattle Rainier's.

During his career he played in three World Series and was inducted into the Cincinnati Baseball Hall of Fame. In August of 2000 he was honored by throwing the first pitch at the Mariners game against New York. He was the oldest surviving Pacific Coast League baseball player and the second oldest major-leaguer at the time of his death in Idaho. This was the passing of one of baseball's greats.