You know the Pelican poem? Everybody knows one version or another and it and it goes like this:

A wonderful bird is the pelican,
His bill will hold more than his belican. (or belly can)
He can take in his beak
Food enough for a week,
But I’m damned if I see how the helican. (or hell he can)

The pelican is one of the more heavy birds that can fly. It has short legs and weighs up to 17 pounds with a wing span of nine feet. A collection of them sit on the rocks with little activity unless it is early 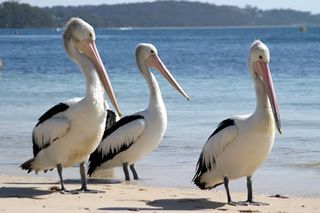 morning or late afternoon. Then they fly off the water around the pools of water formed among the rocks until suddenly they turn beak down, wings pressed to their sides and drop like a WW II bomb hitting the water with enough speed to disappear for a moment. Then they tip their beak up as the float on the surface and swollow their meal.

In the dusk of morning you see the black outline of the birds sitting on the rocks against a lighter sky. It looks like a painting that should be hanging somewhere.

There is competition for the fishing among the rocks.At day break men walk to the rocks and with nets they toss pull in fish they put in plastic buckets. One of them wades waist deep into the surf and dumps the bucket in a small open fishing boat that has pushed its nose into the beach area. Money is exchanged and the fishing boat leaves. One wonders how there could be any fish left since the process goes on – pelican and fisherman – seven days a week.

We leave this morning for Phoenix and then drive to Scottsdale through Thanksgiving. It has been wonderful weather and the resort has treated us very well. We have spent almost all the time at our room enjoying the dip pool, view and balcony for relaxing. The resort has provided us great service, a beautiful location and gracious people.