Bill Dedman has written a fascinating article with wonderful photographs about a little known multimillionaire of the 1920's, William A. Clark and one of his daughters’s, Huguette Clark. See http://www.msnbc.msn.com/id/35446674/ns/business/at msnbc.com, the news Web site. He’s done an excellent job of combining photographs with a unique story. Mr. Dedman can be reached at bill.dedman@msnbc.com.For additional information see Wikipedia http://en.wikipedia.org/wiki/William_A._Clark and The Clark’s: An American Phenomenonby William Mangen. While the story of Clark’s daughter, Huguette ("hue-GET") was far more interesting then her father, the background of the wealth is important to the story.

When he died, William Clark was the second richest man in America, second only to Rockefeller, but he

was born in a log cabin in Connellsville, Pennsylvania in 1839. He was tall for the time, 5 feet eight inches and rail thin. He moved with his family to Iowa where he taught school and study law. After working in quartz mines in Colorado he traveled to Montana where there was a gold rush going on. He tried panning and placer

mining and used that money to become a trader of basic mining supplies, buying low in Salt Lake and selling high to the minors. He also became a banker who took over mines when the mine owner defaulted on the loan. He soon became one of the "Cooper Kings" of Butte, Montana. He built a 34 room multimillion dollar mansion there. He had mines in Nevada and in Arizona. His mine in Jerome, Arizona paid a profit of $400,000 a month or in today’s dollars $10 million.

He had a brother Ross Clark who was in Los Angeles and the two brothers bought thousands of acres in Los Angeles County. The planted sugar beets and built a factory to process them. They were involved in the effort to get a railroad connection with the mines in Montana as well as

Nevada and California. Clark County Nevada is named after them.

But, he wanted a title and decided he wanted to be a U.S. Senator. The legislature, at that time, appointed senators, so using his newspaper the Butte Minor and his money he began a campaign to be named senator. In 1899 he was appointed and headed to Washington, but soon a scandal came to light that he had bribed the legislature and he was refused approval. A later campaign was successful and he served one term, but insisted from that time that he be addressed as "Senator" Clark.

After leaving the Senate, Clark moved to New York and built a lavish mansion there on 5th avenue in

Manhattan. There were more then one hundred rooms plus servants quarters resulting in some one hundred and twenty one rooms in all. The main banquet room had a marble fireplace 15 feet across. The breakfast room had 200 carved panels. It was filled with paintings of famous painters from Europe. In fact, there

were four art galleries. It had Turkish baths and it’s own small railroad line to bring coal for heating. There was a rotunda some thirty six feet high. He spent some $7 million and it included a Louis XVI solon, a marble statute by Rodin, oak ceilings from the Sherwood forest as well as tapestries from Europe

The home was called "Clark’s Folly" and was considered so ostentatious as to be ugly. This is the home he lived in until he died at age 86 on March 2, 1925. It was sold several years later for less then half

what it cost to build and was then torn down for an apartment building.

Clark had married Katherine Stauffer in 1869. By 1878, she and their children lived in Europe most of the time while Clark would commute across the Atlantic each winter to stay with them. She died in 1893. Clark had sponsored an aspiring

actress, Eugenia LaChapelle who had come to him as a teenager for support. Clark had sent her from Butte to boarding school and then on to Paris. The year Clark became a senator she became pregnant with Andree who was born in 1902. He was 62 years old and Anna was 23 years old when at the time of the birth of the first child.

She then had Huguette born in 1906 in Paris where they lived with their moth er Anna. Clark later claimed they had secretly married before the birth of the first child, but no marriage record was every produced to prove it.

For me, Dedman’s article is far more interesting when discussing history after Clark’s death involving Anna and William’s daughter, Huguette. She is now 103 years old and left no children. At the time of her father’s death, her mother got a mansion in Santa Barbara and $2.5 million dollars. The rest of his estate, approximately $300 million or $3.6 Billion in today’s dollars went to Huguette and the four older children. Huguette was given More then $90,000 a year or $1 million dollars in today’s dollars.

The Santa Barbara estate was known as Bellosguardo. There was a salt pond behind the estate which was a bird refuge. Huguette donated $50,000 to restore it. After her mother died in 1963, Huguette stopped visiting Bellosguardo. The house was maintained by the staff, however, as if she were coming back the next day. Classic old cars in the garage, expensive paintings on the wall and the yards groomed. It’s value is over $100 Million dollars with its 21,000 square foot home on twenty three acres of land. Caretakers continued to maintain it but say they have never seen her.

She also owns another estate in New Canaan, Connecticut. She bought it in 1952 and expanded it. Known as "Le Beau Chateau" it has twenty two rooms, eleven fireplaces, nine bedrooms and baths plus an elevator and walk in vault. The house is 12,766 square feet on fifty two acres. But, it has set empty for fifty seven years while caretakers maintain it as if she might return at any time. It is now on the market listed for $34 Million in 2005 and now reduced to $24 Million.

In spite of her various homes, she lived primarily in New York at a co-op at 72ndstreet overlooking Central Park. It has forty two rooms and is 15,000 square feet. It has two art galleries, seven bedrooms 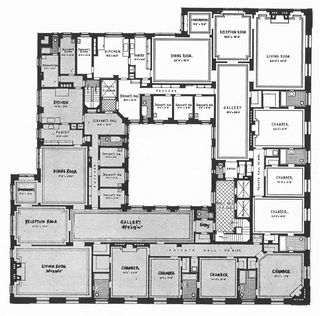 and rooms for nine servants. It’s worth about $100 million, but the staff have seen Huguette on a few times in the last thirty years.

After her father died, Huguette practiced music and art. In 1928 she became engaged to William Gower who had worked for her father. They were married at the Santa Barbara estate that year. She was 22 and he was 23 years old. They moved to New York to live in a fifth avenue apartment close to her mother. Two years later she moved to Reno with her mother and six servants to establish residency for a divorce from William. After the divorce she and her mother took a cruise to Hawaii. At age twenty four Huguette disappeared from society. She will be 104 this year and her attorney won’t disclose where she is. She may be in a nursing home, but not even her relatives appear to know for sure. Her attorney says her mind is clear and he frequently receives instructions from her, but by phone. Nor does anyone, including relatives, know where her fortune will go when she dies since she has no children.

6 thoughts on “MULTIMILLIONAIRE WILLIAM A. CLARK AND HIS DAUGHTER HUGUETTE”