I hope I am not violating a copyright or personal ownership ethic, but our friends Pat Kennedy and his wife Fawn (Janet) Liddle write so descriptively of their adventure travels that I thought they ought to be shared. They live close to the entrance to Mount Raineer National Park and each year they go on a new adventure. They should write a book they do such a good job of taking you there. Here is their last e-mail from India:

Meanwhile, deep in the black heart of ancient patriarchy….

Hungry and exhausted, we arrive in Guwahati, not a good state to be in when you need every ounce of 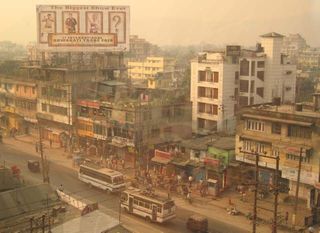 reserve to with stand the culture shock of urban India.  The 20 mile taxi ride from the airport to our hotel was the stuff of third world legend, worthy of a youtube video in its sheer insanity.

Every day insanity of huge trucks and buses, in states of astounding decrepitude barreling along jammed to over flowing, belching black clouds of exhaust, mingling with pedal power rickshaws, motorcycle taxis, cows and bicycles, wooden oxcarts filled with rags, gabbing pedestrians, police check points and road construction, with women in bright saris laboriously pouring new cement for the road, one bucket at a time.  And everyone laying on their horns in a mad symphony of warning, our driver throttling full out.  Relax, I tell myself, they do this every day.  But then several times we were thrown forward from braking, barely avoiding collisions.  Hence the honking.  India.  The foulest air and the crumbling blight and the press of a billion souls.

Arriving at our hotel, we feed our faces and then retreat behind earplugs in our room falling into a dead sleep.  Muslim call to prayer at dawn, as the cacophony of traffic on the streets below swells to greet the day.  Rested and fed, it’s a whole new day and our sense of adventure returns, along with the sense to get out of this city.  We had hoped to get restricted area permits to travel into the hinterlands, but the more we learn the more we fade on the idea.  Too many difficulties and potential stranding problems.  We’re bolting to Bagdogra on an afternoon flight, putting us within striking distance of Nepal, Sikkim

and the hill station tea towns of Darjeeling and Kurseong.

Wifester is in a computer cubicle several shop fronts down with a bright assortment of students and businessmen plugged into the rest of the world.  Interactions defect back to me in this male universe.  She asks a questions and I receive the answer.  I place a food order and I am asked what my wife would like.  Women do the mean, mule work.

The men have a certain aggressive surliness, nothing overt, just  a subtle hot blooded temperament.  Leaving the airport with our baggage cart, we are set upon by a squabbling pack of taxi drivers.  I rebuff their negotiations and they bicker among themselves in Bengali, trying to present a united front of overcharging, which quickly crumbles.  I accept a low offer and the driver quickly grabs our cart and hustles away to escape the resentments.  A smartly dressed policeman wades into their ranks and they scatter like hyenas from a lion seeing his lathi, a whip like cane which inflicts a severe welt or laceration.  Crowd control.  The cops have clubs and lathis.  The military have rifles and sand bagged machine gun emplacements.

They’re in all the public places as a counterforce to the Naxalite insurgency here, a Maoist separatist movement of many decades.  Tens of thousands have died in this quiet war.  Hot blooded.   Most of Northern India is squabbling for autonomy from the corrupt government.  Yesterday, a  woman gathering firewood on the outskirts of town here, had her nose bitten off by a leopard.  Time to go.

The macho taxi driver takes off down the highway like he is in a drag race, only it’s an obstacle course with oncoming trucks right on our side of the street, along with motorcycles, pedestrians, slow ancient wooden oxcarts, and cows, those beautiful  Brahman cows and their calves calmly meandering everywhere in the middle of the highway.    I have forgotten my strict rule to never look out the front windshield in my useless attempt to make sense of the insurmountable hurdles we miss by bare inches while careening at high speeds.

I forcefully turn my head to look out the side window and make myself relax.  There are people everywhere.  Clouds of pollution scratch my eyes as I see the decayed, abandoned, unfinished concrete buildings which house thousands against the gray polluted sky, the thick carpet of garbage which lacquers the embankments of grossly polluted rivers, the sand bagged machine gunned armed police checkpoints.  The actual bright spots in my vision are the beautiful women in their gorgeous saris and the brightly colored cheerful bill boards promising a better world.  India is my perfect yoga.  It stretches me further than I think I can stretch, till finally I relax.

We arrive at our hotel in the heart of the horrid city and expect a hero’s welcome, receiving instead a grumpy acknowledgement, and our room which looks nothing like on the website.  When I inquire as to how we could get a permit to go to Tawang, a Buddhist town near the Bhutan border, at first I am completely ignored, then I am told it is, “Not good idea.”   Then I am told, only by a tour for 1000 dollars.

By evening we decide to leave this awful city.  Next morning rested and fed we go for a walk for just a few blocks down a side street.  Surprisingly, we run into the friendliest, nicest people.  They ask me to take their photos and we walk along the street in a swarm of kind sweet goodwill . ( I’ve attached some photos in the nest emails.)  Our drive back to the airport is by a kind man who drives carefully and takes a more scenic route past colorful markets of beautiful produce and fascinating scenes.  I love the warmth and the color.

At the airport I find the helicopter service that goes to Tawang every day.  But, they say, first we have to get a permit in Delhi.  Delhi is a 3 hour jet flight or many days of travel  by train.  We give up that plan.