The National Geographic channel has an excellent series on the sinking of the Titanic. Seehttp://www.nationalgeographic.com/ I watched a documentary and was very impressed with it. I had always assumed the reason for the sinking was simple and obvious: she hit an iceberg, but it turns out there is a lot more to the story than that.

This was the largest ship ever built at the time. She was nearly 900 feet long, twenty five stories high 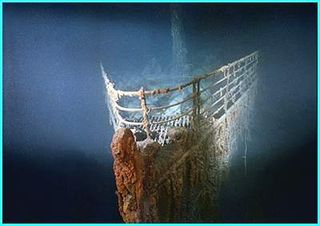 and weighed 46.000 tons. There were sixteen watertight compartments in the lower section that could be quickly closed. The Titanic was a White Star Line built in Belfast Ireland. Because of the many state of the art safety features she was claimed to be nearly unsinkable. According to the builders in the event of a collision this ship would stay afloat for two or three days. When she left on her maiden voyage there were 2227 passengers and crew aboard the ship. The passengers included of the wealthiest people in the world.

On Sunday April 14, 1912, the fifth day of the maiden voyage of the R.M.S. Titanic it received a wireless message at 9:00 am warning of ice bergs and field ice. At 11:40 am another message was received that there was "much ice reported." At 1:40 pm reports of passing icebergs and "large

quantity of ice" were received. Captain Edward John Smith of the Titanic took the message to Bruce Ismay of the White Star Line, owner of the vessel. He stuffed it in his pocket and continued his conversation.  This was supposed to be Captain Smith’s last voyage as he planned to retire on its return to Southampton. It’s widely believed that Ismay was pushing Captain Smith to proceed at full speed in order to break the record set by her sister ship, Olympic, the year before. The Titanic was traveling at twenty two knots, the fastest speed she could achieve. Then wireless messages wee received from another ship warning of ice, followed by another message and then another all warning of icebergs in the area, but the ship pushed on at top speed.At 9:00 pm, Smith left the bridge, telling the officer in charge to keep a sharp lookout for ice. In the wireless room, senior operator Jack Phillips was at the wireless key. At 9:40 pm he received a message from another ship that reported a large rectangular ice field the Titanic was not aware of and the ship was already inside of it. Phillips was swamped and the message was never brought to the bridge.

At 10:00 pm Officer Murdock took over as Officer of the Watch on the bridge. Forty Five minutes later 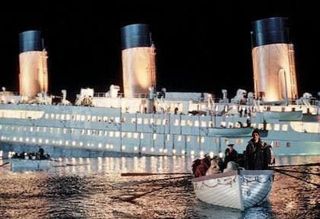 Phillips was communicating on the wireless when a near by ship, the Californian, wired that it was stopped and surrounded by ice. Phillips was upset about the interrupting message and wired back: "Shut up, Shut up, I’m busy.." Upset at this response the wireless operator on the Californian shut off the ship wireless and went to his bunk to sleep.

At 11:30, while the ship was plowing ahead at full speed, twenty two knots, the night was pitch black and visibility was impossible. At 11:35 lookouts saw a slight haze they couldn’t make out. At 11:40  one  of the lookouts rang the bridge and shouted to Moody "Iceberg! Right ahead." The ship took a hard starboard and the engine room was signaled for full speed astern. The watertight doors were closed and fireman had to move quickly not to be trapped in the watertight compartments. Given the size and weight of the massive ship it could not turn or slow in time to avoid the iceberg. In a few minutes there was a light grinding sound as the ship side sideswiped the iceberg. Chunks of ice were knocked off the iceberg falling on the deck.

Captain Smith ran up to the bridge and asked "What have we struck?" "An iceberg sir" the first officer told him. The ship designer, Thomas Andrews, was also on board and quickly inspected damage below decks. There were a series of holes in the ship side. Andrews concluded the ship was doomed. Smith asked him how long she would float and he replied "An hour, maybe two, not much longer. The wireless

operator began emergency messages for help. The Californian was very close and could have saved the passengers, but because of the earlier exchange the operator had turned off the ship’s wireless and gone to bed. The ships did respond were too far away to get there in time.

Vicki Bassett has written an comprehensive scientific article giving significant details in her article Causes and Effects of the Rapid Sinking of the Titanic. Http://www.writing.eng.vt.edu/uer/bassett.html Here are some of her observations.

For seventy three years the Titanic lay undisturbed on the floor of the ocean about 350 miles southeast of Newfoundland, Canada. Then in 1985 oceanographer Bob Ballard discovered the wreck. Several visits to the site have taken place and the wreck filmed. Rivets and parts of steel plate were recovered and studied. These studies showed that the rivets that fastened the steel plates on the side of the ship were wrought iron with imperfections. At extremely cold temperatures the rivets were very brittle. As the rivets failed and the heads were sheered off the seams to open up and water began to pour in.

In addition to the rivet problem, the design of the watertight compartments actually contributed to the rapid sinking. The compartments in the bow extended high to the upper deck, but the remaining ones only extended up a limited distance. The designers anticipated a bow collision and the front compartments would keep the water from moving on, but since it was sideswipe the water poured in compartments and then over the top into the next. When the doors were closed it tended to trap the water in the bow area making it heavier then the rest of the ship and causing it to sink bow first. It’s been speculated that the ship would have been better off with no compartments allowing the water to be distributed evenly along the length of the ship and allowing to stay afloat hours longer then it did.

The water was four degrees below freezing. As bow began to dip down, passengers scrambled to the stern. People in the life boats saw almost 1500 people, still aboard, clinging to the ship only to fall as the bow sunk lower. The next morning the ship Carpathia rescued 705 people. One thousand five hundred twenty two passengers and crew perished in the icy water.

When the ship contacted the iceberg she damaged three hundred feet of the hull which allowed water to flood six compartments. By 2:00 am the bow of the ship has pitched forward enough the propellers were out of the water. At 2:10 am the ship was at a forty five degree angle bow into the water. By 2:20 am the stern has sunk out of sight and the ship is gone. The ship that was supposed to stay afloat for several days rapidly sank in less then three hours. Of the 2227 people on board only 705 survived the sinking.

Then there was a the life boat situation. Since the ship was "unsinkable" the Titanic carried lifeboats for just over half of the passengers. There was room on deck for twice as many lifeboats then she carried, but one row was removed just before she sailed for a better appearance.

There were other tragic circumstances. One ship that heard the wireless call for help headed for the location full speed, but found a wall of ice. Apparently it was on the opposite side of the massive iceberg and couldn't get to the area.

What about Captain Smith? It is not known how he died when the vessel sunk, but one report was that Smith dove into the sea from the bridge minutes before the final plunge to the bottom began and swam off into the freezing water. Other passengers who did not survive included American Millionaire’s John Jacob Astor and Benjamin Guggenheim. The story of Isidor Straus and his wife Ida is touching. She almost got into a life boat at the urging of her husband, but then refused saying "We have been living together for many years. Where you go, I go." They died together. The "unsinkable" Molly Brown, wife of a Colorado silver mine owner was the only woman on board to have rowed a lifeboat to safety.

The band aboard the Titanic were men of courage. As passengers were loaded into life boats while the boat was sinking, they continued to play music that was cheerful and calming. By 2:00 am the last lifeboat left the ship with more then 1500 people still on board. The band continued to play as the ship sunk lower and lower at the bow with the stern rising out of the water. Soon the deck slope was such the bandmaster released them while he continued to play a simple hymn. The rest of the band refused to leave and played until the boat broke into two pieces when a sudden wave washed the band overboard as the vessel made its final plunge. There has been a lot of speculation as to what the last song was. No one really knows, but it may have been Nearer My God to Thee

First and second class passengers could reach the lifeboats with stairs that led right to the boat deck, but third class passengers had great difficulty making it to the lifeboat area. Some gates separating the third class section were locked. There had been no lifeboat training for passengers and confusion contributed to the problems. In addition, lifeboats were launched with empty area for more passengers. For example, lifeboat Number 8 was lowered with only 28 occupants out of a capacity of sixty five.

Lita and I have an indirect connection with the Titanic. That's because for 150 passengers or crew, Halifax, Nova Scotia is their final resting place. White Star Line paid for the grave stones in the grave 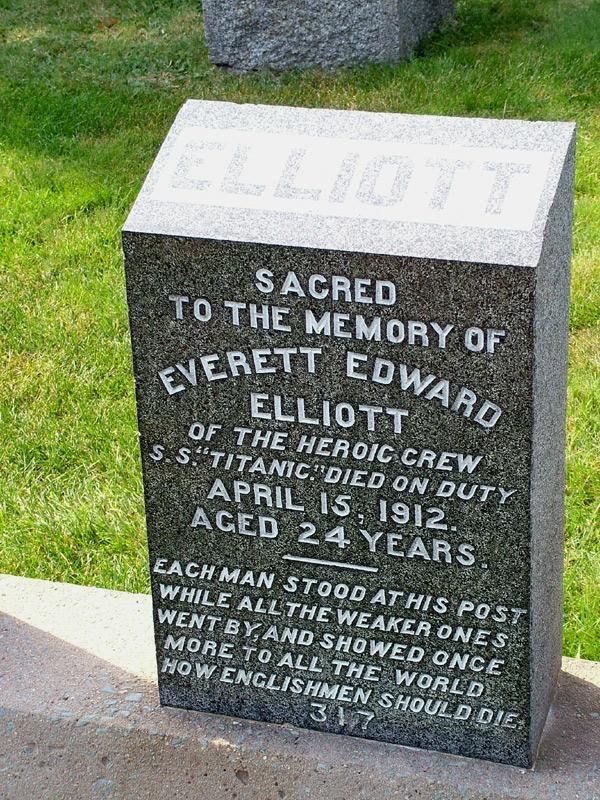 yards. We were there and visited the graves. You see, the White Star Line became the cunard-White
Star and then the Cunard Line. It built the RMS Queen Mary and she sailed the North Atlantic from 1936 to 1967 until retirement. It is listed on the National Register of Historic Places and berthed in Long Beach, California. She was replaced by the Queen Mary 2, which at the time of her construction in 2003 was the longest, widest and tallest passenger ship ever built. She has fifteen restaurants and bars, five swimming pools, a ball room, a theater and many other features. Lita and I sailed on her out of New York several years ago and one of her stops was Halifax where we made the visit.

One thought on “THE SINKING OF THE TITANIC 1912”