Allan Barra wrote a book, The Last Coach, about Alabama coach Bear Bryant. I thoroughly enjoyed it and enjoyed reading about this football coaching great. Here are few notes about the contents you might find of interest.

• In the 1951 sugar bowl, Bryant's team made a spectacular upset against Bud Wilkinson’s ranked number one Oklahoma team. Afterwards in the locker room, in 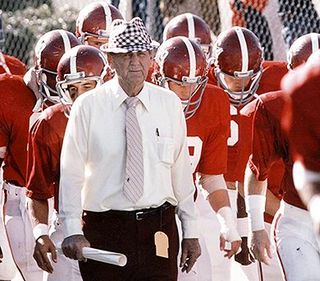 the middle of the shouting and cheering, Bud Wilkinson, the Oklahoma coach, walked in and the room fell silent. Wilkinson had just lost his first football game in four years. He went from player to player shaking hands and congratulating them and then gave a tribute to their Coach before leaving.

• Jack Pardee, who played for Bryant, said the Coach would tell them: “What are you going to do when you are 35 years old and you lose your job and you come home one day and your kids are sick and your wife has run off with a shoe salesman? What are you going to do then? If you quit in the 4th quarter of a football game, what is going to keep you from quitting then?” Pardee said: “Well by the time I was 35 all those things had happened to me, except the part about my wife and a shoe salesman. Because of the things he taught me, I was able to fight cancer. And that was my 4th quarter.”

• Pat Trammell was a quarterback for Bear Bryant. Bryant said about him “he can’t pass and he can’t run; all he can do is win.”

• Bear Bryant had a fondness for players who were not awfully talented but who didn’t know it. One of these was a player Lee Ray Jordan, In a 1963 game against Oklahoma Jordan made 31 tackles. Bryant said "Jordan will get them if they stay between the sidelines”

• In October of 1969 Alabama was leading in a game 26 to 21 when their opponent completed a pass for 25 yards and a first down. Bryant threw his hat to the ground and went looking for defensive Coach Ken Donahue. Bryant told him he was fired. One of the other assistant coaches was stunned and said “the coach just fired Donahue.” The other assistant coach glanced up and told him, “Don’t worry about it. He’s already fired him twice this half.”

• In 1973 Alabama played Notre Dame and was beaten by a last minute pass 24 to 23. In the press box sports writer Herbie Kirby of the BirminghamPost Herald filed his story about winning pass with only 2 minutes left in the game. Moments after filing the story, Herbie collapsed with a heart attack and died in the press box.

• Ohio coach Woodrow “Woody” Hayes said “there are 3 things can happen when you pass, and 2 of them ain’t good.”