We have just concluded our office retreat which we held this year in Santa Fe. Our office staff and their families along with the lawyers stayed at the beautiful Ecantanto Resort about 15 minutes outside of Santa Fe. The resort is a wonderful place with a staff that treated us very well. We enjoyed Santa Fe and the colorful history of this part of the United States. The Native Americans sell their jewelry and other art work in down town.

The background of these people is equally colorful. Spain had invaded Mexico and extended it’s boundaries into New Mexico. The Spanish colonization included imposing Spanish religion on the Pueblo Native Americans as well as prohibiting their practicing their own traditional religious beliefs. They also interfered with their traditional economy by pressing them into forced labor for construction of buildings, missions, roads and other projects the Spaniards wanted 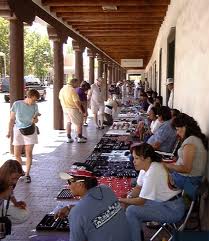 done. While this also protected the Pueblo’s against attacks by the Navajo and Apache raiding parties it disrupted a traditional way of life.

The colonization of New Mexico occurred in about 1598. In the 1670's there were drought’s in the region which resulted in famine and other problems. The people began to turn to their old religions resulted in the Spanish Franciscan missionaries acting to repress the practice through the military. The Kachina dances by the Pueblo Indians were ordered stopped and all masks, prayer sticks or religious effigy’s of the Pueblo’s were seized and destroyed. After that, the Spanish Governor ordered the arrest of forty seven Pueblo medicine men he accused of witch craft and put them in prison. Four of these were ordered hanged and the remaining publically whipped & put back in prison. When the news of this spread the Pueblo leaders lead a force to Santa Fe and since the Spanish soldiers were away fighting Apache’s, the Governor was forced to release the men from prison. One of them was San Juan called by his Indian name Pope’ pronounced "Po Pay."

After his release Pope’ and the leaders met in nearby Taos to plan a revolt against the Spanish. Runners were dispatched to other Indians to advise them of the plan. The attack was planned for August 11, 1680, but Spanish soldiers had captured some of the runners and learned of the plot. As a result, the date was moved to August 10th. A force composed of the Taos, Picuris and Tewa Indians on their Pueblo’s killed some forty Franciscan missionaries and another 380 Spaniards including men, women and children. Survivors escaped to Santa Fe for protection, but Pope’s force arrived, surrounded the town and cut off it’s water supply. The Governor called for an escape and the remaining 3000 survivors headed for El Paso del Norte. That left Sante Fe and New Mexico in control of the Pueblos. Crosses, Catholic religious objects and churches were ordered destroyed and all signs of Catholic religion removed.

Following the revolt the diverse Pueblo tribes separated by miles of territory and speaking eight different languages quarreled about control and issues of occupation of Santa Fe. In 1692 Diego de Vargas took advantage of the Pueblo disorder and returned with Spanish forces to Santa Fe. He promised clemency if they swore allegiance to the Spanish King and returned to the Catholic religion. Indian Leaders met in Santa Fe and agreed to his terms. However, Vargas ruled with such an iron hand that in 1693 there was another revolt while Vargas and his troops were away and Santa Fe was recaptured by the Indians. Vargas returned and there was a bloody end to the revolt. Seventy Indians were executed and four hundred put in prison for ten years. In 1696 there was another revolt during which five missionaries were killed and settlers killed as well. Vargas’ retribution was unmerciful and by the end of the century the Spanish control was complete.However, the revolts did result in substantial land grants given and traditional practices allowed to the Indians

The Spanish controlled New Mexico until Mexico independence. Mexico remained in control until the Mexican-American War. In 1845 the United States annexed Texas which was under Mexican control and war followed which lasted from 1846 to 1848. It resulted in Mexico being forced to give up it’s possessions of Texas, California and New Mexico in exchange for $18 million dollars, but done with a gun held to Mexico’s head. Mexico accepted the Rio Grande river as it’s national border, but the Spanish and Pueblo influence is still very present in New Mexico.