Professor Michael Sullivan, who teaches history at the University of Washington, Tacoma, called me for information on piece of history. He was interested in the role my dad played in the affair, but I had to refer him to my sisters because I was too young to remember the actual events. The call brought back memories of what I had been told about.  Professor Sullivan was kind enough to send me photos which I am publishing along with my understanding of the story based upon internet reports. 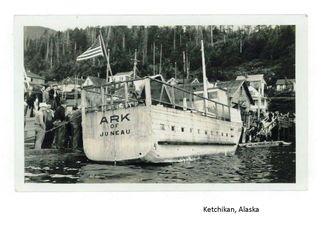 The story begins during the Great Depression. Paul Satko, age 49 was unemployed. He had lost his 24 acre farm, gas station and parking lot in his home town of Richmond, Virginia. He was unemployed. He heard about the government offering homesteads of 40 acres each in the Matanuska Valley in Alaska. Satko decided he would take his family to Alaska and homestead. It was 1938 and he decided to build a boat to get there. He was a welder so he welded a steel frame for the hull 40 foot long, 8 foot wide. He welded the steel frame to a truck chassis with truck wheels in the rear. The front end of another truck was used to pull it. He covered the frame with canvas & created a living space for the family. 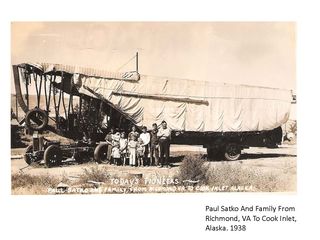 they began the drive across the country to Tacoma. It took 81 days with numerous problems with various highway patrol law enforcement officers. They stopped many times to allow Satko to do odd jobs for money to complete the trip. Long before arriving in Tacoma newspapers had picked up on the story and there was nationwide publicity following the family and their journey.

When they finally arrived in Tacoma he removed the frame from the chassis and began finishing the boat which he had decided to name The Arc. While in Tacoma one child became ill and died in the hospital. However, work on finishing the boat included installing 2 inch thick planks on  the frame and finishing construction of the boat. The engine to power the boat was the 1927 Buick diesel truck 4 cylinder engine he removed from the truck that hauled it there. When he was done the boat ended up weighing 15 tons with several tons of cement for ballast 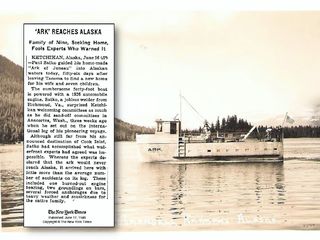 n November 1939 he launched the boat. Newspapers reported that some 4,000 to 5,000 were on hand to watch the launch. The design was Satko’s own idea and it brought a lot of comment and doubt as to its  seaworthiness.  In fact, it got stuck about half way down the ways and had to be pulled out with a Foss tug.

By April of 1940 the family was ready to depart for Alaska. An estimated 15,000 people showed up at the Port Defiance Dock to wish them a safe voyage. Even the Mayor of Tacoma was there to commend them for their "American Spirit."  With the family waving good by the boat headed North towards Seattle.

However, when it reached Magnolia Bluff in Seattle it ran aground and was stuck. The newspaper took photos and when the boat docked in Seattle the local authorities  got involved. When Satko tried to leave without permission he was jailed and his children put in juvenile detention.The Maritime Pilot’s Association 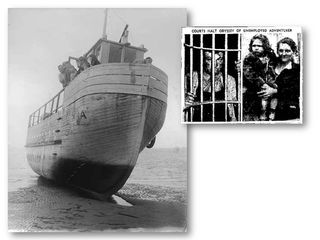 complained that the boat was unseaworthy and Satko was not competent to run it. The Welfare office got involved along with other local authorities.There was a court hearing where multiple experts said the boat was unsafe. A lawyer representing Satko called an expert and even his own expert agreed it was unsafe. The judge decided the boat was unsafe and the children in danger. He entered an order prohibiting them leaving the state until changes, the expert insisted were necessary, had been made to the boat.

When Satko's supports in Tacoma learned of his arrest they were so irate at the Seattle interference they raised money for a lawyer, got Satko out of jail, had his children released. After the hearing they also donated materials for changes to the boat. The court allowed the boat to go to Everett for the work. Satko and his 18 year old daughter Hazel, sailed the boat to Everett where some work was done, but not the major changes ordered. Satko believed the experts were wrong and that he knew more then they did since he built the boat. Mollie and the children were driven by supporters to Everett where they boarded the boat and continued North to Anacortes after stopping in LaConner. The Chamber of Commerce in both cities had invited them to stop there on their way to Alaska

In Anacortes the Coast Guard inspected the boat and put a hold on continuing the trip and because the work ordered by the Seattle courtt had not yet been done.  While in Anacortes, my dad and others got involved to support the family's dream of homesteading in Alaska. Dad provided groceries from the family grocery store and others gave assistance. A group of Anacortes supporters, most of whom were involved in the Chamber of Commerce, cooperated with the family to continue their trip.

Following a plan, the family waited until midnight on May 25, 1940 to quietly cast off and head for Canada because Satko had calculated that he could cross the Canadian border before the Coast Guard discovered he was gone and would be out of their reach. He had obtained the necessary clearance papers from the Customs office. They by passed Friday Harbor because the coast guard was located there and arrived  arrived safely in Canadian waters in spite of a storm. Since they had proper papers, Canadian authorities cleared them to continue the trip.

For the next forty one days the family continued their struggle to get to Alaska. There were multiple stops, two more groundings of the boat, stops for engine repair and pauses to hunt and fish in order to feed the family.

Finally, they arrived in Ketchikan, Alaska. The mayor gave them the key to the city. The New York Times had followed their 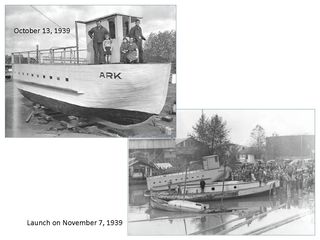 progress along with many other newspapers across the country. Even Movietone News filmed their arrival. After a rest there, they continued on to Juneau and arrived July 26, 1940. Shortly after getting there Mollie gave birth to a daughter they named Northsea. They decided to look for homestead opportunities in Southeast Alaska instead of continuing on. They located homestead opportunities in the Juneau area and applied for them.

They beached the boat and lived in the boat while they started work on a  log cabin and clearing the land. The area was 100 acres and they cleared 8 acres to grow produce. Locals said vegetables wouldn't grow and the local stores sold vegetables shipped from seattle. So, Satko decided to see what would grow. He bought a large variety of vegetable see what would grow. He found that some wouldn't grow, but others grew in abundance. He first sold the vegetables out of the back of a parked vehicle in downtown Juneau until the stores began to buy them up.With the proceeds they were able to support themselves while continuing work on he homestead. However, somehow Satko missed the deadline for filing for the homestead and was denied title to the land.

In spite of the problem, the family remained in Alaska until 1946 when most of the family returned to Virginia. Three older children stayed. In time, weather destroyed the boat leaving only the steel frame. Paul died of a heart attack in 1957 at age 66. Mollie died in 1995 just days before her 92nd birthday.

It was quite an adventure by a very determined man who had a goal in mind. The story is inspiring in many ways. Professor Sullivan says there will be a short portion of the radio documentary about this story on May 27th on KUOW 94.09 – Steve Sher's morning program. The story is part of a Smithsonian Exhibit called Journey Stories which will be touring Washington State over the next year. My thanks to Professor Sullivan for reminding me of this colorful historical event.