In 2009 Robert Duvall, Bill Murray and Sissy Spacek are featured in the movie Get Low based on a true story about Felix "Bush" Breazeale from Roane County in East Tennessee. Known as "Uncle Bush" Felix was born on June 29, 1864 on Dogwood Road in Roane. He was one of eight children and was a life long bachelor. He lived in a cabin in the hills near Kingston where he lived alone during his 78 years of life. He decided that he 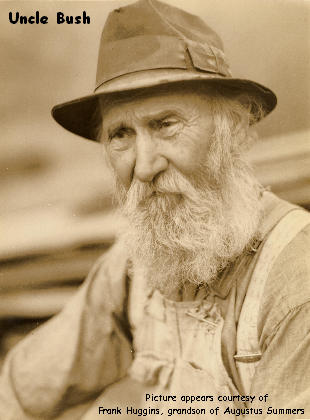 wanted to have his funeral while he was alive and could enjoy it. His funeral plan was first reported in the Roan County Banner, but was picked up by the Associated Press and United Press wire services as well as Life Magazine.

He was quoted in the paper as saying: "I just wanted to hear what the preacher had to say about me while I am alive."

The funeral party was held June 26, 1938. An enterprising neighbor charged twenty five cents to park in his field and was said to have made $300 because instead of the expected local crowd the number of people was estimated to be eight to twelve thousand people. Others sold soft drinks and hot dogs to the crowd. Flowers were delivered from Knoxville and Chattanooga. The Hawkins Mortuary provided a hearse with Bush sitting in the front seat and a home made coffin in the rear. They had trouble getting to the location due to the people and traffic Cars from some fourteen states were backed up for two miles. When they arrived, some fellow fox hunting friends acted as pall bearers opened the crowd to allow "deceased" to exit the vehicle and walk to a place besides the flower covered coffin.

People strained to get a look and some fainted from the heat as well as excitement. Reporters and cameraman covered the event. It was a hot day when Reverend Charles E. Jackson from Paris, Illinois 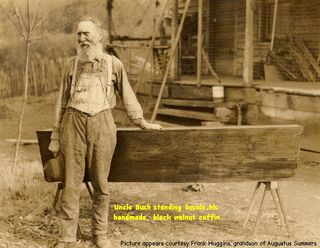 preached the funeral sermon. During his sermon about Bush he told the crowd:

"This service is not a bad idea…It gives us an opportunity to take thought of tomorrow and anticipate the great adventure called death."

A group sang his favorite hymn "On Jordan’s Stormy Banks I stand." After the service, Bush shook hands with well wishers and make an "X" on cards for the people. When he was asked why he had never married he said:

"I couldn’t get the woman I wanted and wouldn’t have the women I could get."

He became a celebrity and on the 4th of July that year, he threw out the first pitch in a baseball game between two local teams. He was featured in Robert Ripley’s "believe it or not" and was flown to New York to be interviewed on the radio.

he called "Mule." He liked to say the mule was "a heap smarter then most the folks you meet." He lived another five years and died at age 79 on February 9, 1943. Although he said he didn’t want another funeral, some locals arranged a small service.

While the movie takes many liberties with the facts, the acting is outstanding and the film is entertaining.