Recent Republican and Tea Party debates have revealed much about the lack of compassion of it's members. In the Tampa CNN Tea Party Express debate, moderator Wolf Blitzer asked Ron Paul a hypothetical question about a young man who elects not to purchase health insurance. The man has a medical crisis, goes into a coma and needs expensive care. “Who pays?” Blitzer asked.

“That’s what freedom is all about, taking your own risks,” Paul answered. “This whole idea that you have to prepare and take care of everybody. . . .”  Blitzer interrupted: “But Congressman, are you saying that society should just let him die?” The crowd cheered and shouted “Yes.” They obviously agreed we should just let him die. 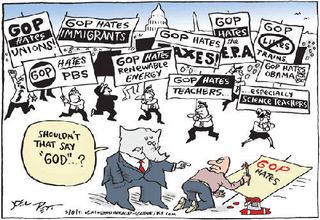 Perry, a question about Texas. Your state has executed 234 death row inmates, more than any other governor in modern times. Have you….” The question was interrupted by loud applause from the audience. Clearly the audience fully approved of executing 234 people.

In the Fox News/Google debate, a gay army officer posed a question about don’t ask, don’t tell and the soldier was booed by the audience. We were already aware of this groups hatred of gays, but booing a gay member of the military is a new low.

The Republican Party and Tea Party, led by governor Perry, are showing their ugly side. The Republican party has long been the party of corporations, big business and the rich upper class, but under George Bush has veered far to the right in a way not seen since the days of Barry Goldwater. Great Republicans of the past wouldn’t recognize this party. Lincoln, Eisenhower and Regan would be shocked at what their party has become. Even the heroes of the Republican conservative side such as Robert Taft and Goldwater, were not as lacking in human compassion as the present membership

It has largely become the party of “No.” It favors capital punishment, denial of health care to the poor and hatred of gays.  It hates illegal immigrants & their children. It would destroy labor organizing. It is without compassion for the poor, the sick, the disabled, the elderly and minorities.

It was vice president Herbert Hoover who said:

It is frightening that this is a description of the very people the Republican party and Tea Party believe should be left to fend for themselves and if they die, well too bad. While the economy explains in part this “every person for themselves” attitude, it is clear we live in very troubled moral times

One thought on “REPUBLICANS AND TEA PARTY MEMBERS: THE PARTIES OF HATE”