In the 1933 movie In their Own League Tom Hanks as the manager to Gleena Davis star catcher who’s going to quit the team because it’s so hard. He says to her: "It's supposed to be hard. If it wasn't hard everyone would be doing it. It's the hard that's makes it great.” 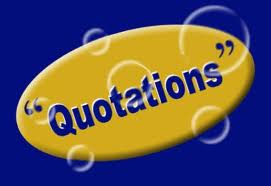 the viewer's time. Make sense. Speak English. Use half the words you think you need

William Van Hooser said:  Life's a dance. Take it one step at a time and keep listening for the music.

GK Chesterton: “The Bible tells us to love our neighbors and also to love our enemies; probably because they are the same people.”

RH Macy failed seven times before his store in NY caught on. English novelist John Creasey got 753 rejection slips before he published 564 books. Babe Ruth struck out 1,330 times but also hit 714 home runs. Michael Jordan did not make the high school basketball team his sophomore year because the coach said he wasn=t good enough. Julia Child could barely cook until she was 34 years old and attended cooking school. Thomas Edison=s teachers said he was too stupid to learn anything .Albert Einstein didn’t=t speak until age 4 and did read until 7. His teachers described him as mentally slow. Henry Ford went broke five times before he finally succeeded. Winston Churchill did not become Prime Minister of England until he was 62 years old and after a lifetime of defeats.

Clarence Darrow. “I never wanted to see anybody die, but there are a few obituary notices I have read with pleasure.”

Los Angeles rookie Elden Campbell when asked if he earned a degree at his alma mater Clemson University in 1991 said: "No, but they gave it to me anyway.”

When Supreme Court member Chief Justice Vinson died Frankfurter said: "This is the first indication I have ever had there is a God,"

Ginger Rogers did everything Fred Astaire did, only backwards and in high heel shoes

Criminal defense lawyer Percy Forman: "I never charged client more than he had."

Mark Twain: "Always do right: this will gratify some people and astonish the rest."

Until today I thought you were nothing more then a loudmouth ignoramus, but after watching you tonight I discovered you have other despicable qualities as well."

Idi Amin once said: "Many people mistake what I am saying for what I am thinking"

Aldous Huxley: "Facts do not cease to exit because they are ignored."