There is a nonprofit organization, Ted Talks, that posts videos of talks by people in different fields.

http://www.ted.com/talks One of them is by John Wooden, fomer UCLA basketball coach. Here's an excerpt from his talk.

You know a number of years ago, there was a Major League Baseball umpire by the name of George 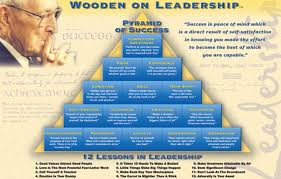 Moriarty. He spelled Moriarty with only one "i". I'd never seen that before, but he did. Big league baseball players –they're very perceptive about those things, and they noticed he had only one "i" in his name.You'd be surprised how many also told him that that was one more than he had in his head at various times.

But he wrote something that I think he did while I tried to do in this pyramid. He called it "The Road Ahead or The Road Behind"

"Sometimes I think the Fates must grin as we denounce them and insist the only reason we can't win, is the Fates themselves that miss.Yet there lives on the ancient claim:we win or lose within ourselves. The shining trophies on our shelves can never win tomorrow's game. You and I know deeper down, there's always a chance to win the crown. But when we fail to give our best,we simply haven't met the test, of giving all and saving none until the game is really won.

Of dreaming there's a goal ahead Of hoping when our dreams are dead.Of praying when our hopes have fled.Yet losing, not afraid to if bravely we have given all. For who can ask more of a manthan giving all within Giving all, it seems to me, is not so far from victory.And so the fates are seldom wrong, no matter how they twist and wind.It's you and I who make our fates we open up or close the gates on the road ahead or the road behind."