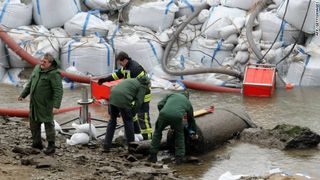 Experts say about eight percent of the UXO bombs could go off spontaneously.

In the news today 45,000 people from the German town of Koblenz had to be evacuated when three unexploded bombs were discovered in the Rhine River. One was a 4,000 bomb, a smaller bomb and the other a fog producing explosive. The fog bomb was designed to create fog like material blocking vision of the ground guns aimed at the aircraft that dropped bombs. They successfully defused or exploded all three and the population was allowed to return home.

In 2002 German police had to evacuate about 3,000 people near Hanover when two UXO were discovered. Over 50,000 tons of bombs were dropped on Berlin and as a result some 7300 bombs have been detonated successfully since the mid 1980’s. In Belgium and neighboring countries about
ten UXO are discovered every day. In Germany some 2,000 specialists are employed to defuse unexploded bombs that turn up almost daily. Last year 10,000 people had to be evacuated in Northern France when a 550 UXO was discovered and successfully defused. In June of last year, in the German town of Gottingen a 1,100 bomb was discovered. 6,000 people were evacuated. Three workers were killed and six wounded when German bomb disposal experts – men with years of experience – were trying to defuse it.

Tom Alexander who runs a Berlin company that specializes in locating and assessing the removal of
unexploded ordnance says:

"I still have to work about 15 or 20 years. We won't run out of bombs and ammunition," he says. "There are still massive amounts of ammunition in Berlin from the ground fighting and of course from the bombing of the city."

Germans routinely come across bombs in farmer’s fields or city streets. In 2006 a highway worker,
south of Frankfurt was killed when his cutting machine hit a bomb beneath a busy autobahn. In the state of Brandenburg, surrounding Berlin, an average of 631 tons of old munitions from two world wars is found every year.There are so many explosives – bombs and grenades – under the ground around Berlin's busiest airport that more than 500 sites will be excavated to finally make it safe for passenger jets if they stray off the tarmac. Bomb disposal is a risky business. In 1994 a disposal expert was killed in Brandenburg while attempting to defuse a bomb. In 2003 two bomb disposal xperts were killed in Salzburg while trying to defuse a bomb found near the central train station. One bomb disposal expert says the old munitions are becoming more dangerous by the year as they gradually corrode. Keep in mind the UXO are in addition to unexploded mines planted on beaches, fields and roads all over Europe. This in addition to unexploded mortars, hand grenades & artillery shells.

One lesson to be learned is that war is destructive and its effects linger on for many years after the fighting has ended in human suffering as well as enviornmental consequences. One could also reflect on defective products, drugs that have an unknown effect on future generations and the unknown health impact of chemicals in our food products as being a different kind of UXO but just as deadly.